Of Orb, Verrazano, and the Decline of Racing 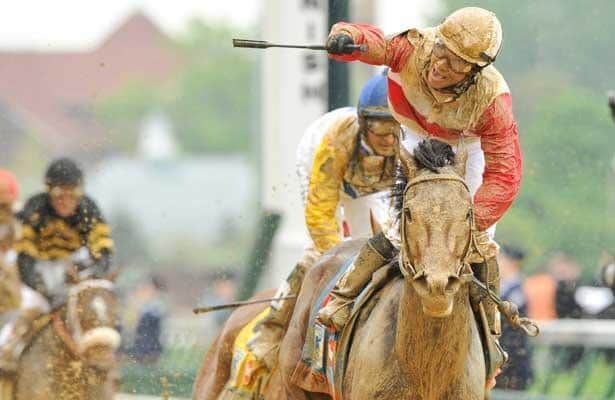 They say TV ratings took a nose-dive at this year’s Breeders’ Cup. I don’t know why. I was at Santa Anita, and the event was worth watching. They also say that the Kentucky Derby winner is retired, just a few months removed from wearing the roses. I don’t know why. Orb could have been a real stud on the track at four.

Imagine if you will hearing that Kevin Durant, Andrew Luck, Mike Trout, and a number of other of the most promising young athletes of the NBA, NFL, and MLB were retiring this month. They might all be 25 and under, and not yet in their athletic primes, but their team owners decided that their ability to reproduce was far more valuable than their value on the field of play. Crazy, right? It would cause Black Monday for season tickets sales. And rightly so.

I hope racing fans enjoyed Verrazano while we had him. Racing’s rookie of the year in 2013 is one and done. Sayonara, Big V. We hardly knew you. Can you imagine what the Argentines would have done if Messi announced his retirement after his first season of footballing. It would have been worse than the passing of Eva Perón.

Sure, racing has many ills, but I’ve always been able to take the good with the bad. What other sport can rival it in beauty and excitement, and anticipation and mental challenges, after all. I was bred to love racing, and my need for horse speed was well cultivated at a very early age. Without sustainable stars, though, even I might find the breaking point.

Of all the problems that horse racing may have, the most damaging, in my eyes, is the completely disproportionate amount of money that can be made away from racing, compared to what is available on the race track. In essence, robbing the world of the very thing that we all crave to see ... the best in the world. Sending a healthy young star to the breeding shed is counter to any rational idea of what is good for the maintaining of the popularity of the sport, let alone any pipe-dreams of growth.

Seeing promising young colts like Orb and Verrazano head off to the breeding shed, before the realization of any true and real racing potential is understood, is disheartening. More than that, it is infuriating. How can we root, and I mean truly posses longtime fandom, for any young colt, when the rug is likely to be yanked out from our feet before they reach even their tenth race? I honestly have no good answers for that one.

A sport with a dearth of stars is a sport destined to shrivel up in space. I don’t want to see that happen to racing. Something needs to be done. Not allowing a stallion to breed until five-years-old is as good a start as any.

Meet Brian Zipse
Brian has been a passionate fan of horse racing his entire life. Taken to the races at a very young age, he has been lucky enough to see all the greats in person from Secretariat, Forego, and Ruffian through Rachel Alexandra, Zenyatta, American Pharoah and Justify. Before coming to HRN, Brian displayed his love for the sport through the development of his horse racing website, which quickly became one of the most popular blogs in the game. His racing partnership venture, Derby Day Racing, invites more fans to experience the thrill of racehorse ownership.
The Editor of Horse Racing Nation from 2010-2017, Brian authored a daily column as Zipse at the Track, created the popular racing webcast HorseCenter, and added his editorial flare to the overall content of the website. Now a Senior Writer for HRN, Brian continues to contribute his thoughts on racing, as well as hosting HorseCenter. A big supporter of thoroughbred aftercare, he serves on the Board of The Exceller Fund.
Brian's work has also been published on several leading industry sites. He has consulted for leading contest site Derby Wars and is a Vox Populi committee member. He is a voter for racing's Hall of Fame, as well as a weekly NTRA poll voter.
A horse owner and graduate of DePaul University, Brian lives just outside of Louisville with his wife Candice and daughter Kendra.
ZATT's Star of the Week
Emmanuel

These are the weekend's 25 fastest stakes winners
Newgate 's victory in the Grade 3 Robert B. Lewis...