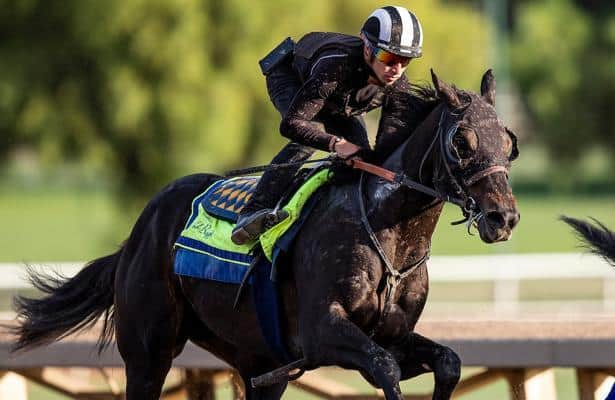 Jack Wolf, head of the Starlight Racing partnership that owns a share of Eight Rings, expected a late return to training this winter for the Grade 1 winner would count him out of the 2020 Kentucky Derby prep picture.

“The horse was off the Triple Crown stuff,” Wolf said.

Then Eight Rings worked a half mile last Thursday for trainer Bob Baffert in 47.20 seconds.

Connections’ original target race off the layoff, Oaklawn Park’s March 14 Rebel Stakes (G2), is back in play for Eight Rings, who’s also campaigned by SF Racing and Madaket Stables, among others, in a group often referred to as “The Avengers.”

The partnership, established to seek out stallion prospects, achieved that goal already with Eight Rings, who will stand at Coolmore upon retirement. The Sham Stakes (G3) winner Authentic and Sunday’s breakout debut winner Charlatan — who registered a 105 Beyer Speed Figure going six furlongs — are two more of their runners.

Authentic is expected back at the races March 7 in Santa Anita’s San Felipe Stakes (G2). Eight Rings may run the next week. Plans for Charlatan are “yet to be determined,” Wolf said, though Baffert’s known for always having a plan.

A son of Empire Maker, Eight Rings has raced four times, showing up as a flashy first out winner on Aug. 4 at Del Mar before he dumped rider Drayden Van Dyke at the start of the Del Mar Futurity (G1). With John Velazquez newly up, the colt rolled to a six-length win in the Sept. 27 American Pharoah (G1) at Santa Anita.

Ranking then among top prospects for the Breeders’ Cup Juvenile, Eight Rings pressed outside of Storm the Court and looked poised to pounce at the top of the stretch Nov. 1. Instead, he faded from contention, finishing sixth in a puzzling showing.

Eight Rings worked three times following the Breeders’ Cup before given time by Baffert. Since then, stakes winners such as Thousand Words, Nadal and High Velocity have emerged for the barn, too. Nadal is also a possibility to run in the 1 1/16-mile Rebel, which pays out Derby qualifying points on a 50-20-10-5 basis to its top-four finishers.

Wolf talked to Baffert last week, asking him of the Kentucky Derby, “‘How many are you going to have in this thing?’ He said, 'Hopefully 20.'”

Horsemen’s exec: Brace yourself, fed regulation is all but here
Lexington, Ky. Even with court fights and a visit...

Saturday Plays: Justify sibling playable in Belmont double
Siblings of famous horses do not present a good be...