Zulu Alpha from claimer to stakes winner in Keeneland's Sycamore 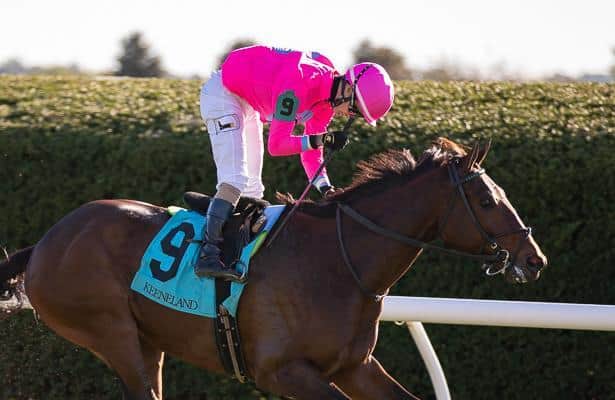 Claimed in his last start, Zulu Alpha returned a big winner with new connections, sliding up the rail to take Thursday’s Grade 3, $100,000 Sycamore Stakes at Keeneland.

"He runs really big every time he runs, especially the last three starts," said Ortiz who, even though he didn't condition Zulu Alpha until this race, kept an eye on him. "Right now I'm speechless. I'm very thankful."

Did you have Zulu Alpha in the Sycamore @KeenelandRacing?@ToddTVG highlighted him as his best longshot & @Gabby_Gaudet_ talked to John Ortiz before the race.

Arklow, using the Sycamore as a potential Breeders’ Cup Turf prep, ran second by two lengths with Bigger Picture third in the field of 11 turf marathoners.

Zulu Alpha’s final time for 1 1/2 miles was 2:34.21. He tracked the leaders throughout before jockey Channing Hill guided him inside of pace-setting Final Copy in the stretch.

"He really finished up nice with plenty of horse left," Hill said. "I just want to congratulate Johnny. This is a big day for him."

A Calumet Farm homebred, Zulu Alpha, who has run in both Europe and the United States, improved his record to 6-3-4 in 20 career starts. He paid $16.20 to win.

The favored Arklow advanced from fourth to second while running across the wire the first time.

"I was trying to get him cover first time down the lane," Hill said. "When (Arklow) pressed the pace, it was either, am I going to fight him to stay in this bad spot, or am I just going to kind of put him inside?

"The way he ran at Churchill last time, obviously he enjoys kind of coming through the fence."