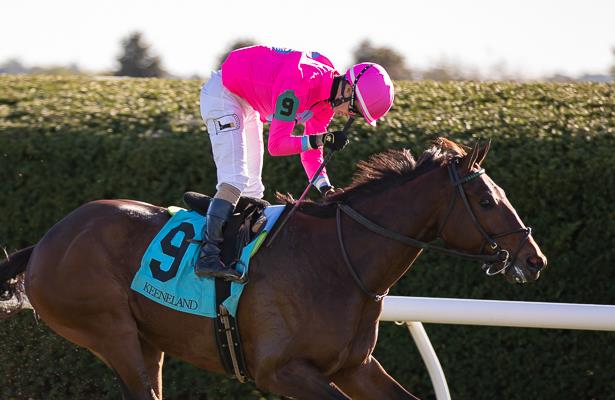 The shrewd claim of top turf horse Zulu Alpha continues to pay dividends for owner Michael Hui and trainer Michael Maker as the 7-year-old gelding on Sunday rallied down the middle of the course to win the Grade 2, $175,000 Elkhorn Stakes at Keeneland Race Course.

Zulu Alpha and regular rider Tyler Gaffalione teamed up for their third graded stakes score of the season in the 1 1/2-miles Elkhorn following previous scores in the Pegasus World Cup Turf (G1) and Mac Diarmida (G2), both this winter at Gulfstream Park. Claimed by Hui for $80,000 in September 2018, the son of Street Cry improved his record to 34: 12-5-5 with more than $2.1 million in earnings.

Sent off the even-money favorite, Zulu Alpha and second-choice Arklow were content to sit near the back of the 11-horse field as longshot Postulation sent the field through moderate fractions. Postulation continued gamely on the lead into the stretch under Julien Leparoux, but storming down the outside was Zulu Alpha who blew post the front runner in the final 100 yards to get the win.

Zulu Alpha completed the three-turn journey in 2:30.82. Postulation held second ahead of Nakamura and Jais's Solitude.

"It feels amazing. I'm so glad to be getting the opportunities I've been getting," Gaffalione said.

With a trio of graded stakes wins including a Grade 1 on the resume this season, Zulu Alpha -- sits in prime position to challenge for an Eclipse Award as North America's outstanding turf horse. The lone blemish on the record this year is a runner-up effort previously in the March 28 Pan American Stakes (G2) at Gulfstream Park.

Maker said after the Pan American, COVID-19 and the unsure racing schedule led Zulu Alpha to the farm as a result. It wasn't clear how he would perform going a mile-and-half off a layoff.

“After Gulfstream, we sent him to the farm again," Maker said. "We got delayed with the virus. Going a mile and a half, you’re always a little bit concerned. But even I can’t mess this one up.”

*Rating is based on HRN fan votes, which rank the Top Active Horses in training.
Zulu Alpha Elkhorn Elkhorn (2020)