Gaffalione looks to add to big meet with Zulu Alpha, Got Stormy 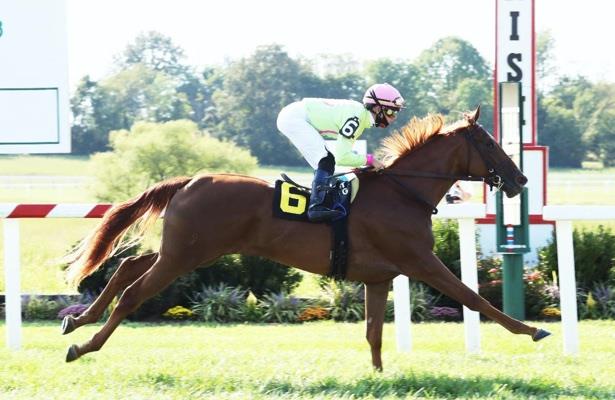 Jockey Tyler Gaffalione has always done well at Kentucky Downs ever since he first rode at the unique track in 2017. Now he’s off to his best start yet, winning with five of his 15 mounts the first two days, along with three seconds and three thirds.

“It’s been a great start so far,” Gaffalione said before Thursday’s races, adding of Matt Muzikar, “My agent has done a lot of work prepping for this meet. He had a lot of confidence coming in. We just had to get lucky with post draws and horses getting in. We’ve been very fortunate so far. The horses have been running great, and hopefully we can keep it going.”

Among his wins was Plum Ali in Monday’s $500,000 Juvenile Fillies for trainer Christophe Clement. “That was the first time I was on her,” Gaffalione said. “They spoke very highly of her going into the race, and she really proved it out there — one of the easiest victories I’ve had over this course. She just loved it. She just galloped. I’m looking for her down the road.” 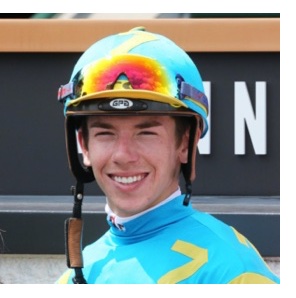 Gaffalione’s previous high for winning races at Kentucky Downs was six in 2018. He also had five wins last year along with another eight seconds. His fewest wins were three in 2017, but two of those were stakes.

“I love it,” the Florida product said. “Just the configuration of the track, the layout, the atmosphere here. It’s so much fun just coming here. It’s a great experience. Great money, great horses. You just can’t beat it.”

Gaffalione might love it even more after Saturday. He rides heavy favorite Zulu Alpha in the $1 million Kentucky Turf Cup, with Michael Hui’s 7-year-old gelding seeking to join Da Big Hoss and Rochester as the only repeat winners of the 1 1/2-mile turf face. Gaffalione took over riding the Mike Maker-trained Zulu Alpha this year, teaming in four races to win the $1 million, Grade 1 Pegasus World Cup Turf and Grade 2 stakes at Gulfstream and Keeneland, along with narrow defeat in another Grade 2 race.

The jockey also is the regular rider of Got Stormy, the $1.6 million earner trained by Mark Casse, for whom Gaffalione won the 2019 Preakness Stakes aboard War of Will. Got Stormy has beaten some of the best turf milers in the world and now will sprint for the first time in her career in the $500,000 Real Solution Ladies Sprint at 6 1/2 furlongs.

“Hopefully the rain stays away and Got Stormy will be running here Saturday,” Gaffalione said. “She’s turning back in distance, and the way the turf course is right now she should love it. We’ve got Zulu Alpha and a couple others, so it should be an exciting weekend. Zulu Alpha, he just knows where the wire is. He knows his job. He knows what he has to do. He’s all class. He’s professional. Mike and his team, they’ve got his number and he shows up for them every time.”

Gaffione’s early success this meet is even more notable given that the already deep riding colony features the largest assembly of top jockeys this season outside the Breeders’ Cup at Keeneland.

“The colony here is incredible,” he said. “You’ve got all the top guys from Kentucky, New York, California, they’re all in one place. This is what racing is all about, right? Kentucky has great racing to offer. Everybody sees it and wants to be here and compete.”

Now 25, Gaffalione started out riding in his native Florida, winning 217 races and $5.8 million in purses to earn the 2015 Eclipse Award as North America’s outstanding apprentice jockey. Riders often struggle after losing their apprentice weight allowances — where their mounts carry less weight than otherwise specified in the race conditions as a means to encourage trainers to use inexperienced riders. But Gaffalione never missed a beat, his purse earnings increasing every year and never winning fewer than 185 races in a season.

So far this COVID-impeded year, he’s won 164 races while accruing $10 million in purses with almost four months to go. Before coming to Kentucky Downs, Gaffalione won 21 races at Saratoga, including the Coaching Club American Oaks (G1) aboard Paris Lights and the Alabama (G1) on Swiss Skydiver, as well as the Bernard Baruch (G2) on the Maker-trained Somelikeithotbrown. In July he won seven races for the riding crown at Keeneland’s five-date meet, including the Maker’s Mark Mile (G1) on War of Will.

“He loves that track, Kentucky Downs, and he loves Kentucky,” Muzikar said. “He’s happy to be there. He’s happy to live there. He’s just happy. I think this past Saratoga meet really helped him. He won a lot of stakes at Saratoga, some big races, some Grade 1s. And that was coming off a strong little Keeneland meet. I think as a rider he turned the corner. Not that he didn’t have confidence before, but he’s really got confidence now. I think Saratoga really boosted him."

Maker, who began using Gaffalione early in his career, said he was riding like a seasoned jockey from almost the beginning.

“He’s a top rider and a great guy as well,” Maker said. “He’s very deserving of his success.”

In 2017, Muzikar began testing the out-of-state waters for Gaffalione, including riding at Kentucky Downs and select days at Saratoga. Now he’s entrenched in a circuit that features Kentucky in the spring and fall, Saratoga in the summer and Gulfstream in the winter. He has won the Churchill Downs riding title twice, including this past spring, and the Keeneland crown twice.

“It’s been such a blessing,” Gaffalione said of his circuit change. “A lot of credit goes to my agent. He was the one who decided to take the next step and leave Florida. I couldn’t be more happier with our decision in where we are now.”

In fact, Gaffalione now considers Kentucky home and plans to buy a house with some acreage in Shelbyville with girlfriend Casi Edwards.

“I love Kentucky,” Gaffalione said. “I love the racing here. The horsemen have been so great to me, and hopefully we can build on that.”