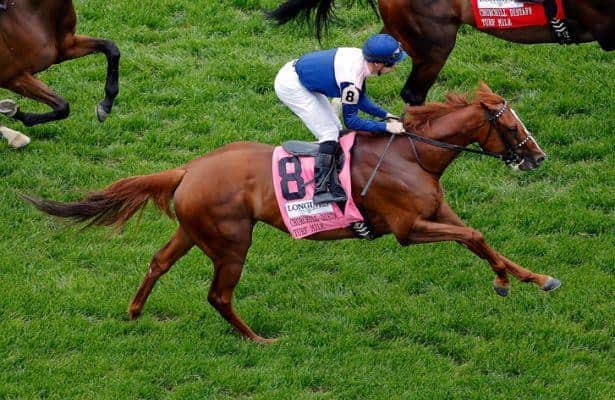 Under a beautifully judged front running ride from jockey Florent Geroux, Empryean Stables’ Zipessa went wire to wire to win the G3 Dr. James Penny Memorial Monday afternoon at Parx. It was the first graded win for the lightly raced 4-year-old daughter of City Zip, as she won for the fourth time in just seven career starts.

Breaking from post five in the seven horse field, Zipessa broke alertly and gained the lead after the first couple jumps. After getting some mild early pressure through the first furlong from longshot Keystone Kelly, she carried a clear lead into the first turn. Turning into the backstretch, she had opened a comfortable two length advantage with no real trouble looming. Javier Castellano was content to bide time while saving ground with the 8-5 favorite Tammy the Torpedo and did edge up within about a length and a quarter of the leader at the midpoint of the backstretch. Zipessa was just strolling along though, running a quarter in 24.37 and a very comfortable half in 48.72. Castellano tried to get his mount to quicken moving to the three-eighths pole, but Zipessa would quicken as well. As the two rounded the far turn, Tammy the Torpedo never got closer than a length.

Turning for home, Geroux roused Zipessa and she quickly responded and opened up a two length lead and was in a full sprint to the wire. The others were strictly running now for second. With Zipessa now in full flight for the wire, second choice, Grade 2 winner Tuttipaesi made a mild rally on the inside to get up for second, but would pose no threat to the winner. Zipessa flashed under the wire a convincing and solid two length winner in what was a relatively easy trip for the improving young filly.

Off as no better than third choice, Zipessa, trained by Michael Stidham, paid $7.40, 3.40 and 2.60. Tuttipaesi (2-1) saved ground, got up for second but was no match for the winner, returned 3.60 and 2.60. Tiger Ride (4-1), toward the rear of the field early, was able to out finish the rest to get third and paid 3.20 to show. Tammy the Torpedo had a clear shot off the final turn but simply had no late kick and finished fourth. The final time for the one mile and one-sixteenth on a turf course labeled firm was 1:41.42.