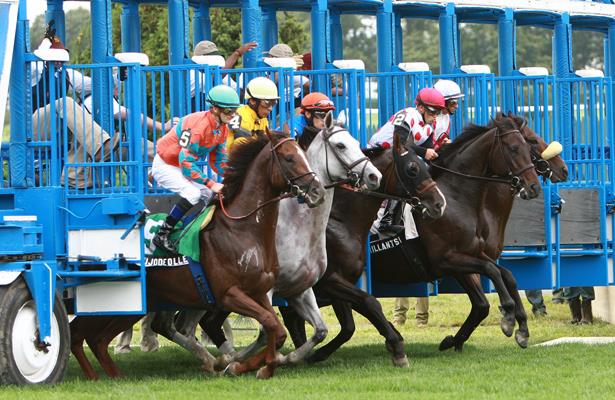 Trainer Christophe Clement sent out a pair of four-year-old fillies in the second running of the $150,000 Intercontinental Stakes on Thursday, and it was Zindaya who outfinished her favored stablemate by rating right behind the pace to take her second consecutive stakes win over the Belmont Park turf course.

The Intercontinental, which was contested by 12 fillies and mares four and older, was part of the Belmont Stakes Racing Festival presented by Draft Kings. The festival is highlighted by  Saturday's running of the Grade 1, $1.5 million Belmont Stakes and American Pharoah's attempt to become the 12th Triple Crown winner.

Zindaya, who won the six furlongs License Fee Stakes last out on May 1 and was sent off at 5-1 in the field of 12 under Manny Franco, took over in the stretch to cover seven furlongs in 1:22.17 on a turf course rated as good.

The Irish-bred Marbre Rose, the 9-5 favorite who was dropping down from Grade 2 company in her only other start this year, finally found clear running inside the sixteenth pole under Irad Ortiz, Jr. and kicked on to be second by 2 1/4 lengths. French-bred Dauphine Russe was another length back.

"They both ran great," Clement said of Zindaya and Marbre Rose. "The filly who won, they do not give her credit. She won the License Fee months ago and she won well again today. The filly who finished second also ran a very good race. It was a little bit tight in the turn, but she finished well. I told (Franco) before the race to just be careful with the pace scenario because it's not the same as in a six-furlong race. I thought that the seven-eighths was fine. She ran a mile last year in California and almost got the mile, so I was pretty sure she could get the seven-eighths today."

"I just followed Mr. Clement's instructions," said Franco. "He said if someone wants to go, just sit behind them and save the horse until the very end, because today is seven furlongs and she's won at six. We did it. I feel comfortable with her. I know her and she's a nice filly," said Franco.

Zindaya is by More Than Ready out of the Kris S mare Aristocratic Lady. She improved her record to four wins with two seconds and two thirds in nine outings and upped her earnings to $283,740.