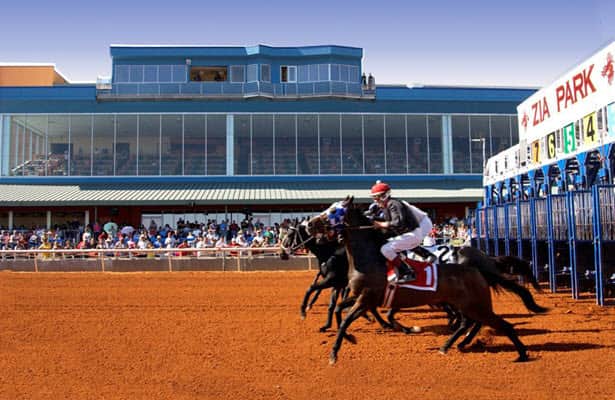 A year ago while in the throes of the COVID pandemic, Zia Park was limited to an abbreviated meet and had to scrap its signature program featuring the Zia Park Derby, Zia Park Oaks and five other open stakes.

The 10-race card, which has a first post of 2 p.m EST, is highlighted by the $250,000 Zia Park Derby featuring Arkansas Derby (G1) winner Super Stock. He will be ridden by Irad Ortiz Jr., the three-time defending Eclipse Award winner who along with Flavien Prat will be on hand to add star power to the day’s proceedings.

“We created this about seven or eight years ago to have a signature event for non-New Mexico breds that would maybe attract some horses to Zia,” said Christpher McErlean, vice president of racing for Zia Park owner Penn National Gaming Inc. “We saw on the calendar at this time of the year that 3-year-olds are mainly running against older horses, so this is kind of your last shot at a 3-year-old stakes. We tried to fill a niche there and put up a halfway decent amount of money for these races.”

McErlean added the Land of Enchantment Day program “gives us a chance to shine the spotlight on Zia Park.

“We’re not the biggest player in the space, but this provides us a little bit of a limelight,” he said.

Super Stock, who was 16th in this year’s Kentucky Derby, is the 1-5 favorite for trainer Steve Asmussen in a field of five set for the 1 1/16-mile Zia Park Derby. In his two most recent outings, Super Stock won the Ellis Park Derby and was third in the Oklahoma Derby (G3).

Asmussen also has the morning-line favorites in the Distaff with Casual (3-5) and Championship with Tenfold (8-5). The Hall of Fame trainer’s other starters are Pauline’s Pearl (9-5) in the Oaks, Optionality (3-1) in the Princess and Much Better in the Sprint.

Ortiz will ride all six of Asmussen’s starters.

As for Prat, Southern California’s perennial top rider, he has mounts in five of the seven open stakes including aboard morning-line favorite Lady Mystify (6-5) in the Oaks for trainer Peter Eurton.

Prat also has three assignments for Southern California-based trainer Peter Miller. He will ride None Above the Law, the 4-1 second choice in the Zia Park Derby, A Paycheque Smile (15-1) in the Princess and Aquitania Arrival, the 2-1 morning-line favorite in the Juvenile.

Tuesday's Land of Enchantment card, which kicks off with two quarter-horse races, has come lacking in field size in the eight Thoroughbred heats. Horseplayers will be greeted with just 6.22 starters per race.

"I think, you know, guys with good horses if the purse money is there they will take a shot," McErlean said. "So we want to get bigger fields. Zia Park is not the easiest place to get to. It's a tough ship. We just want to get some recognition on the calendar."

Zia Park is in the midst of a 36-day meet that opened Sept. 26 and ends Dec. 14. It is the same number of days as last year's stand, which was reduced from a scheduled 48 and was held behind closed doors due to COVID.

Average daily purses at the current meet are about $200,000, McErlean said, which are funded largely by the track's casino.

"New Mexico was one of the last places to open up," McErlean noted of the COVID's impact. "The casino didn't open until March. We ran the meet last year with no fans and it was difficult for everyone. I think our purses were about $100,000 a day last year. We tried to give some opportunities to horsemen and get some money in their pockets.

"But coming back next year, business has been pretty good and we'll have a full year under our belts, so I think we should be back to 48 days and those undercard races should be back to $100,000. We'll probably be at two and a quarter ($225,000) per day in purses," McErlean added.

For horseplayers looking to dive in Tuesday at Zia Park, there is one Pick 5 beginning with the sixth race in the Zia Park Distaff and two Pick 4's beginning in the second and seventh races.

Takeout rates are on the high end at Zia Park. They are set at 19 percent for win, place and show, 22 percent for exactas and daily doubles and 25 percent for trifectas, superfectas, Pick 3s, Pick 4s and Pick 5s.