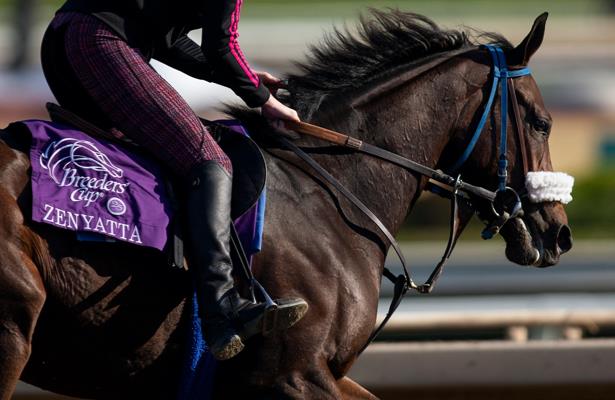 The Medaglia d’Oro filly has been provided a steady diet of half-mile breezes since late December, with trainer John Shirreffs waiting until “she gets a little more confident” before going longer distances.

Zellda most recently worked four furlongs Friday in :50.80. It ranked as the 29th-fastest of 36 drills at the distance that day. In five works at a half mile, Zellda has only cracked 50 seconds once, on Jan. 12 when she went in :49.40.

Of course, Zellda’s champion mother was a famously late developer when trained by Shirreffs, debuting in November of her own sophomore season. The trainer doesn’t expect Zellda to take nearly as long to come around.

“But I’m not in a particular rush to get her to the races," he said. "I want to make sure she’s well prepared, confident and can handle it.”

Zellda would be the third foal to make the races out of Zenyatta, the multiple champion, 2010 Horse of the Year and Racing Hall of Fame inductee. Cozmic One, a son of Bernardini born in 2012, was 0-for-5 on the track. Ziconic, a colt by Tapit born in 2013, was winless in 12 starts. He was twice runner-up and six times ran third while earning $70,465.

As for Zellda's training, Shirreffs is waiting for her to provide the cue before taking the next step.

“I’ve kept her at a half mile...I’m waiting for her to get a little more confident, a little stronger in her stride,” Shirreffs said. “I want her to drag the rider around going a half mile before I go to five [furlongs]. When the rider feels like he has a lot of horse at the wire, then we can go to five.

“Horses, their systems -- their muscular, cardiovascular, digestive, emotional systems -- all develop differently,” Shirreffs continued. “We’ll wait until that all gets on the same page.”

Zellda is a homebred for Jerry and Ann Moss, who also campaigned Zenyatta and both siblings.