Zenyatta-like? Hard Not to Love's another Shirreffs fan favorite 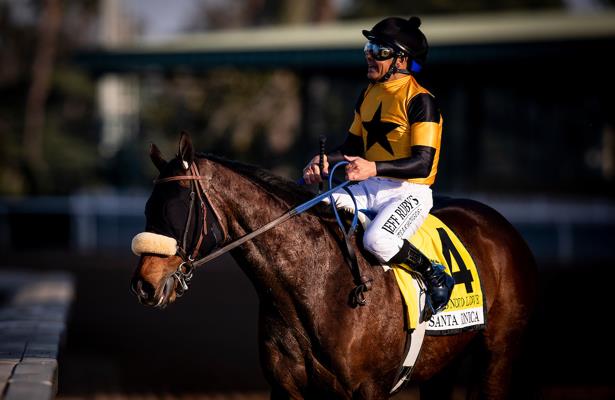 Photo: Eclipse Sportswire
Could it be . . . should it be . . . would it be . . . sanctimonious to mention Hard Not to Love in the same breath as . . . Zenyatta?
John Shirreffs hasn’t quite developed that state of mind yet for his one-eyed wonder filly, but the dazzling daughter of Hard Spun did conjure up thoughts of Zenyatta after she won her fifth race from six starts, Saturday's Santa Monica Stakes (G2), by 3 ½ lengths under regular rider Mike Smith.
Of course, she has miles to go before achieving the legendary status of Zenyatta, winner of 19 of 20 starts under Shirreffs’ trusted tutelage and the only female to defeat males in the Breeders’ Cup Classic (2009) who went on to be named Horse of the Year in 2010.
“She looked good this morning,” Shirreffs said of Hard Not to Love, who lost her left eye as a youngster when kicked by another horse. The filly is an ongoing work in progress as she continues to overcome her disability and prepares for the Beholder Mile (G1) on March 14.

The groom of Santa Monica Stakes winner HARD NOT TO LOVE, Martin Lopez, talks with @BritneyEurton about the love for his filly and why this win is so special. pic.twitter.com/uJ0vxBbMQd

“I think people are starting to like her,” Shirreffs allowed when asked about any similarities to Zenyatta this early on. “I think we can safely say that. She has a lot of talent, obviously. You can’t achieve what she has without the talent.
“She’s fun to watch and it’s enjoyable seeing how much everyone appreciates her. Mike Smith has a special relationship with her, as does her exercise rider, Amy Vasko, and her groom, Martin Lopez.”
And her growing legion of fans.
“They all have their special connections,” Shirreffs said, “and that’s really enjoyable.”
And although Hard Not to Love “enjoys” half the vision of most Thoroughbreds, safe to say she has twice the talent.

Trainer JOHN SHIRREFFS talks about his Santa Monica winner, HARD NOT TO LOVE, and the "step by step" process it's been to get to this milestone. pic.twitter.com/c7TorLaJaZ