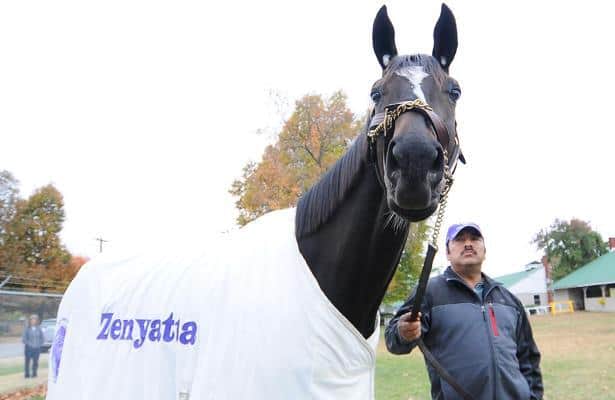 Connections announced via The Queen's Facebook page that a chestnut filly by Candy Ride was foaled Sunday morning at Lane's End Farm in Kentucky.

"We think she’s just beautiful, and Zenyatta is a very proud mom!" the post reads.

More details will be offered later on the horse's blog at Zenyatta.com.

Zenyatta, who won 19 of her 20 starts and is the only female horse to ever win the Breeders' Cup Classic, has had an up-and-down career since retiring from the racetrack.

Her first foal, Cozmic One, is a son of Bernardini who didn't win a race but went on to participate in the Retired Racehorse Project. Her next foal, the Tapit colt Ziconic, didn't win either and has since retrained.

Two War Front foals that followed both tragically died, after which Zenyatta took a year off from breeding. Her current 3-year-old, Zellda, is in training with John Shirreffs at Santa Anita Park, showing a workout as recently as May 9 toward her debut.

Between foaling Zellda and the Candy Ride filly, Zenyatta also lost a pregnancy when due to Into Mischief.