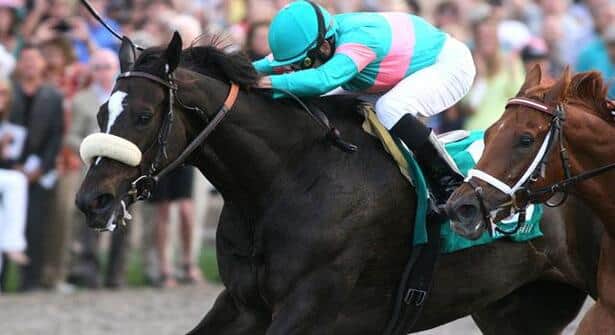 Unbeaten superstar Zenyatta galloped on the main track at Hollywood Park Wednesday morning to the satisfaction of trainer John Shirreffs and was entered to face five foes in the $250,000 Lady’s Secret Stakes, Presented by TVG, Saturday, one of six Grade 1 stakes during Breeders’ Cup Challenge weekend.

Zenyatta seeks to stretch her unbeaten streak to 19 in the Lady’s Secret, highlight of opening weekend of the Oak Tree Racing Association meet, which opens at Hollywood Park Thursday night for the first time in its 41-year history.

Zenyatta, a 6-year-old Street Cry mare, earlier this year became the first horse to win the Vanity Handicap here and the Clement Hirsch Stakes at Del Mar three straight years. She also seeks a record three-peat in the Lady’s Secret, a race she won the previous two years at Santa Anita. The only other horses to win the race twice were Hollywood Wildcat in 1993-94 and Healthy Addiction in 2005-06.

Lady’s Secret rivals do not plan to make the race a walkover for the two-time champion mare. Trainer Eric Reed shipped in a pair from Keeneland Monday, Rinterval and Satans Quick Chick, with assistant Dallas King and groom David McLellan.

Rinterval, a 5-year-old mare, set most of the pace in the Clement Hirsch and finished a game second, beaten only by a neck. Satans Quick Chick, a stretch-running 4-year-old filly, will make her first start since January after being supplemented for $4,500. Last year she won the Grade 2 Raven Run Stakes at Keeneland and set a track record for one mile and 70 yards at Presque Isle Downs. Both are owned by Jerry Jamgotchian.

Trainer Bob Baffert entered Moon de French, a 5-year-old mare coming off a wire-to-wire victory at one mile in the Adoration Stakes at Del Mar on September 5. The Hall of Fame trainer conceded that he faced a daunting challenge.

“Zenyatta is like a guided missile,” said Baffert of the mare’s devouring stretch kick. “She’s got radar and locks down on the leader.”

Baffert gave Zenyatta one of her toughest tests in the 2008 Vanity with runner-up Tough Tiz’s Sis, beaten by a half-length. “Tough Tiz’s Sis didn’t have the best of trips and Zenyatta didn’t run one of her best races,” said Baffert. “She could have been beaten that day.”

Trainer John Sadler, who conditioned Healthy Addiction, entered Switch, the only 3-year-old who upset prohibitive favorite Blind Luck in the Hollywood Oaks in June. Switch will carry 120 pounds, the others 123 each.

The Lady’s Secret will be run as the seventh race and is scheduled to be televised nationally on ESPN.