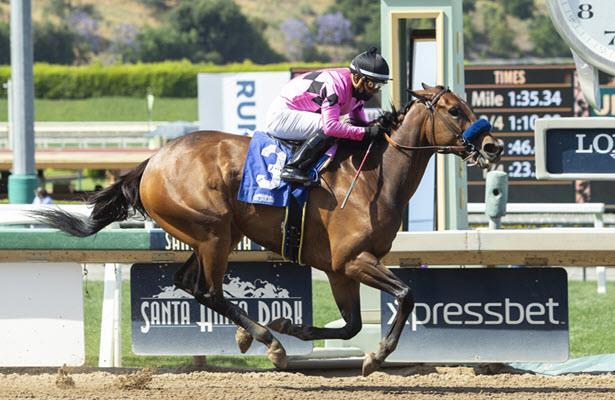 The Grade 2, $200,000 Zenyatta Stakes at Santa Anita on Sunday is a “Win and You’re In” Breeders’ Cup Challenge Series event for the Breeders' Cup Distaff, which will be run at Keeneland on Nov. 7. Trainer Bob Baffert’s Fighting Mad headlines a field of five fillies set to go 1 1/16 miles.

Beholder won the Zenyatta, which was a Grade 1 until 2019, in three consecutive years from 2013-15. She went on to win Eclipse Awards in two of those seasons, 2013 and '15, while also taking year-end honors in 2012 and '16. Beholder was second in the 2016 Zenyatta behind Stellar Wind before winning the Breeders' Cup Distaff in her career finale.

The Zenyatta is carded as race No. 4 out of 11. Here is a full-field analysis with morning line odds from the Horse Racing Nation staff.

1) Fighting Mad [ML 1-1 – New Year’s Day – B. Baffert/L. Saez – 8: 5-1-0 - $444,008] With recent victories in the Clement L. Hirsch (G1) and the Santa Maria (G2), Fighting Mad has emerged as the leader of the Older Female division on the West Coast. Both of those wins came on the front end for Hall of Fame trainer Bob Baffert. Along with Baffert, owners Gary and Mary West, jockey Luis Saez and sire New Year’s Day, the connections are identical to that of Maximum Security, the leader of the Older Male division. Top Choice.

2) Proud Emma [ML 6-1 – Include – P. Miller/R. Gonzalez – 13: 5-2-0 - $236,158] Proud Emma got her first stakes victory in the one-mile Tranquility Lake in August at Del Mar when she pressed the pace, won a stretch duel, and drew off to hit the wire ahead by three. In 2019, she raced in Kentucky and New York, but her two recent races this year in California point to a filly that may be finding her best form yet. Live longshot.

3) Harvest Moon [ML 4-1 – Uncle Mo – S. Callaghan/F. Prat – 4: 3-0-1 - $120,720] This lightly raced 3-year-old won the Torrey Pines (G3) at Del Mar in August from a stalking position while racing a mile. She is currently riding a three-race win streak as a heavy favorite each time. She will go an extra sixteenth of a mile in the Zenyatta while facing the toughest field in her career. Use underneath.

4) Hang a Star [SCRATCH – Tapizar – I. Kruljac/T. Baze – 10: 2-1-2 - $136,611] Since her last win in an allowance race at Santa Anita back in March, Hang a Star has been racing in stakes company. She was second in the six furlong Desert Stormer (G3) and was fourth in the Clement Hirsch. She may prefer shorter distances. SCRATCH

5) Hard Not To Love [ML 5-2 – Hard Spun – J. Shirreffs/M. Smith – 9: 5-2-1 - $528,980] With the exception of her sixth-place finish in the Clement L. Hirsch that came after a troubled trip, the 4-year-old had a series of firsts and seconds dating back to October 2019. She was the winner of consecutive graded stakes at Santa Anita in the seven furlong La Brea (G1) and Santa Monica (G2). The versatile filly has won on the front end and from off the pace while failing to hit the board only once in her nine-race career. Trainer John Shirreffs won this race three times in a row with Zenyatta herself when the race was known as the Lady’s Secret. Use underneath.

Summary: It appears that the likely heavy favorite Fighting Mad may have scared off a couple of possible serious contenders with the Zenyatta drawing only a field of five fillies and mares. That makes Fighting Mad seemingly very hard to beat if able to show the form that made her an impressive front running winner of her last two graded stakes races.

With the rest of the field lacking in any serious early speed, Saez should be able to control the race right out of the gate with Fighting Mad. That should leave Proud Emma, Hard Not to Love, and Harvest Moon to fight it out for the place and show spots.