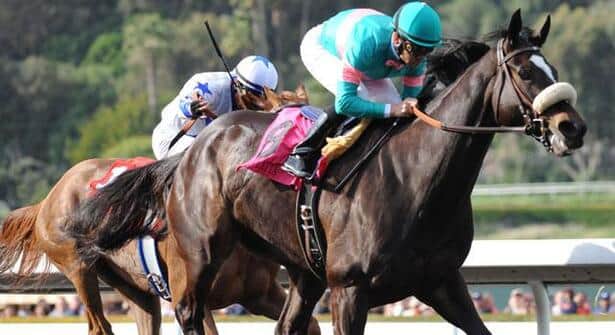 Making her final start in Southern California at the place where she has been stabled throughout her brilliant career, Zenyatta remained undefeated with a thrilling victory in the $250,000 Lady’s Secret Stakes Saturday at Oak Tree/Hollywood Park. The race was one of four Grade I events on the card.

Before an extremely enthusiastic crowd of 25,837, the 6-year-old daughter of Street Cry and the Kris S. mare Vertigineux won for the 19th time – matching the streak of Peppers Pride, who earned her wins in races restricted to New Mexico breds – with a strong rally to defeat 4-1 second choice Switch by a half-length.

The victory was an unprecedented third in a row in the Lady’s Secret for Zenyatta, who is owned by Jerry and Ann Moss and trained by John Shirreffs, and enabled her to become the leader in career earnings by a female thoroughbred.

Winning for the eighth time at Hollywood Park, Zenyatta, who trailed for more than six furlongs under jockey Mike Smith, completed the 1 1/16 miles over Cushion Track in 1:42.97. She ran the last sixteenth of a mile in less than six seconds.

Switch, a 3-year-old Quiet American filly and the Nicholas mare Antoniette, nearly pulled off her second major upset of the year at Hollywood Park. She had defeated Blind Luck in the Hollywood Oaks in June.

Close to the slow pace set by Moon de French, who wound up in a dead heat for third with Satans Quick Chick, Switch took the lead nearing the stretch, opened up 1 ½ lengths with an eighth of a mile to go before being overtaken late. She paid $2.60 to place while finishing 4 ¾ lengths in front of Moon de French.

“She is just amazing,’’ said Smith. “(Switch) ran great, she ran dynamite. I felt pretty confident through the lane and I was starting to hit my best stride toward the end and she gallopd out strong.

“What can I say, she is what she is. She just seems to know where the wire is and she likes to make it a little dramatic. It is just incredible. To be honest with you I try not to get too caught up into it because it’s just too emotional.’’

A record four time winner of the Lady’s Secret, Shirreffs enjoyed the loud ovation Zenyatta, whose final start will come when she attempts to defend her title in the Breeders’ Cup Classic on Nov. 6 at Churchill Downs, received when she returned to the winner’s circle.

“The fans really demonstrate how I feel inside,’’ he said. “I can’t really show those emotions, so I really enjoy them getting into it because that is exactly how I feel. We’re really blessed to have Zenyatta do this. God made her very special and we’re just enjoying it.’’

Rinterval, who had finished second to Zenyatta in the Clement L. Hirsch Stakes in August at Del Mar, was scratched by the track veterinarian after flipping in the paddock. She suffered a leg cut and also hit her head, according to the Hollywood Park stewards.

The Lady’s Secret was not the only Grade victory for Smith. He rode Jaycito to a one length victory over even-money favorite J P’s Gusto in the $250,000 Norfolk Stakes.

The win was the first in the Norfolk for both Smith and Mitchell. The trainer indicated Jaycito will be pointed to the Breeders’ Cup Juvenile on Nov. 6.

“We just always thought he was a two turn horse,’’ said Mitchell. “You put Mike Smith on and you don’t give a lot of instructions. I didn’t tell him to ride him like Zenyatta or anything like that, but he was out of trouble.’’

Like Zenyatta, Richard’s Kid is likely Breeders’ Cup Classic bound after his 8-1 victory over Crown of Thorns and five others in the $250,000 Goodwood Stakes.

Earning his first win in only his second start over the Hollywood Park main track, the 5-year-old Lemon Drop Kid horse out of the Broad Brush mare Tough Broad won by a half-length. He completed the 1 1/8 miles in 1:49.18.

It was the first Goodwood victory for Bob Baffert, who trains the Maryland bred for Zabeel Racing International Corporation. Richard’s Kid, who had won the Pacific Classic at Del Mar for a second year in a row on Aug. 28, has won nine of 27. He has earned $1,716,370.

Ridden for the first time by Alonso Quinonez, who earned his first Oak Tree Grade I, Richard’s Kid, who rallied along the rail after having only one rival beat through the first three-quarters of a mile, paid $18.60, $4.60 and $3.20.

Twirling Candy, who was trying to remain undefeated in his fifth start, was fourth as the 7-10 favorite.

“I just followed the instructions: let him break and let him find his stride,’’ said Quinonez. “We were last and I said, ‘Well, I’m just going to save ground. From there everything went well. I never had to move out, I stayed inside the whole way.’’

In her U.S. debut for owner Godolphin Racing LLC and trainer Saeed bin Suroor, Hibaayeb, the 3-1 second choice, defeated Turning Top by a half-length to capture the $250,000 Yellow Ribbon Stakes.

Ridden by Rafael Bejarano, the 3-year-old Singspiel filly out of the Lion Cavern mare Lady Zonda ran the 1 ¼ miles on turf in 2:00.44.

Racing on Lasix for the first time, Hibaayeb earned her third victory in 11 starts. She increased her bankroll to $519,871.

Turning Top, who was looking for her third victory in a row over the local grass, paid $5.60 and $3.40. The show price on Gypsy’s Warning, the 2-1 favorite who weakened a bit late after setting the pace, was $2.20.