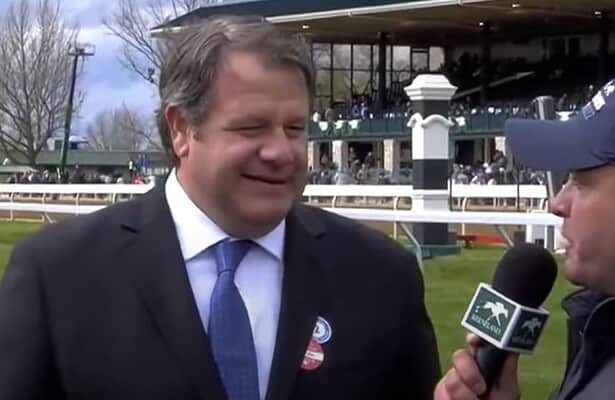 Jeff Drown said it was a tough question. As the owner of Zandon, which was a better experience: holding up the trophy after winning a Grade 1 race, or making the walk from the stable gap to the paddock before the Kentucky Derby?

Get expert picks for the Cigar Mile day card

“Boy, they’re both pretty cool,” he said Thursday with a big laugh. “That walkover is pretty special. It was really fun for me. I had my family; I have five children, my wife, my mom and dad, a number of friends. Gosh, it’s just something we all talk about quite a bit.”

Zandon could bring Drown yet another cool experience this weekend – and maybe two more. The 3-year-old Upstart colt whom he bought two years ago for $170,000 was made the even-money, morning-line favorite for the Grade 1, $750,000 Cigar Mile Handicap on what was forecast to be a wet, windy Saturday at Aqueduct.

Winning the Cigar would define cool, but since he also finished first in the Blue Grass, Zandon would have a second Grade 1 triumph this year. Among 3-year-old males, he would join Cyberknife, Jack Christopher, Modern Games and Taiba. It also would make him and Modern Games the only two in their division with top-level victories over older horses. That could put Zandon into consideration with the other four plus Epicenter for an Eclipse Award.

“I think he’d definitely deserve to be in the conversation, no doubt,” Drown said on Horse Racing Nation’s Ron Flatter Racing Pod. “I’d love to see it, but there’s a lot of good horses that came out this year. Certainly, if Taiba was able to win a third Grade 1 (at the Malibu on Dec. 26 at Santa Anita), that’s a pretty impressive résumé. Outside of that we definitely would deserve to be in that conversation.”

It could be said Zandon has a rivalry with Taiba. They met twice this year. Zandon finished a fast-closing third in the Kentucky Derby, and Taiba wilted to 12th. Taiba got even in September, winning by three lengths in the Pennsylvania Derby (G1) with Zandon coming in second.

Since he was not asked to test Flightline – or Taiba – last month in the Breeders’ Cup Classic, that runner-up finish at Parx Racing for his fourth loss in a row was the last impression Zandon left on racegoers. On the other hand, he conceded nine lengths of early ground before making up eight places, and he earned a career-high Brisnet Speed Rating of 110.

“He definitely had work to do there,” said Drown, a commercial and industrial contractor based in St. Cloud, Minn. “I’d like to hope he’s not so far off the pace in this race. I think that would make it a tough, tough deal for him to be that far back.”

There did not appear to be any burning pace drawn into the Cigar Mile. Mind Control, the 6-year-old who will bring the curtain down on a career that brought him two Grade 1 wins as a young horse, was the most likely candidate to set the early pace in a bid for his fifth win in eight starts at Aqueduct.

Hoping jockey Joel Rosario would be closer than he was in the Penn Derby, Drown was realistic about where Zandon would be settling on the backstretch Saturday.

“Certainly not on the lead,” he said. “Certainly not top three but within striking distance. We don’t want him to have too much to do coming down the lane.”

It will be just one pass down the homestretch. The Cigar Mile will be the first one-turn race for Zandon since his debut victory covering six furlongs last fall at Belmont Park.

“I’m not sure, that one’s up in the air,” Drown said of the cutback to one turn. “He could like it, but he’s done well with two turns. He’s handled it every time.”

Zandon drew post 2, which might be seen as a disadvantage in a lot of mile races. But it is a long run to the turn at Aqueduct, and it figured Zandon would be camped in the rear half of the six-horse field. Drown said he and trainer Chad Brown were fine with the way Saturday’s race was setting up.

“We talked (Wednesday), and we’re pretty comfortable with where we’re at,” Drown said. “It’s not the best post, but it’s not a killer. We should be able to win from there. I feel like he’s training fantastic. I think Chad’s words, exactly, were his last workout was just fabulous. We’re pretty excited coming in.”

There was one other variable thrown into the mix this week when the National Weather Service forecast a 100 percent chance of up to a half-inch of rain Saturday in New York. A south wind in the face of the horses in the homestretch was expected to be blowing 13-18 mph with gusts to 29 mph.

“He’s run on an off track, and he’s been fine,” Drown said, remembering the main track at Keeneland was wet and rated good for Zandon’s Blue Grass triumph. “It was a little chilly and windy, actually, that day. Certainly not fearful of it. I don’t know that it gives us any advantage, but it doesn’t hurt.”

Saying he would be watching Saturday’s race from home in Minnesota, Drown will not duplicate the experience he had in person in Kentucky last spring. That was when he was visibly nervous watching Zandon rally from last place in a field of 11 horses.

“I kind of felt a little pit in my stomach, that’s for sure,” Drown said. “When I saw us kind of moving backwards, I said, uh-oh. That wasn’t the race we were looking for. It didn’t take long to get excited, though.”

As much as that Blue Grass win was the 2022 highlight for Zandon, the four losses since were not out and out lowlights. He seized on the flame-out of the suicidal pace in the Kentucky Derby to finish within 1 1/2 lengths of 80-1 winner Rich Strike. He was forwardly placed in a small field and finished second to Epicenter in the Jim Dandy (G2). Despite a less than ideal trip, Daily Racing Form gave him a career-high 105 Beyer Speed Figure for his third-place result behind Epicenter in the Travers (G1). And he made his big rally in the Penn Derby.

“It’s been a lot of highs and lows, for sure,” Drown said. “He’s never really gone in the gates and disappointed and not shown up, but we certainly hoped to see a couple more wins after the Blue Grass.”

Since Zandon will be racing on as a 4-year-old, Drown was optimistic those hoped-for victories were yet to come.

“We’re coming into a time with him that he’s training really well,” he said. “We gave him a little time, and we just feel confident that he’s got some good races for him coming.”