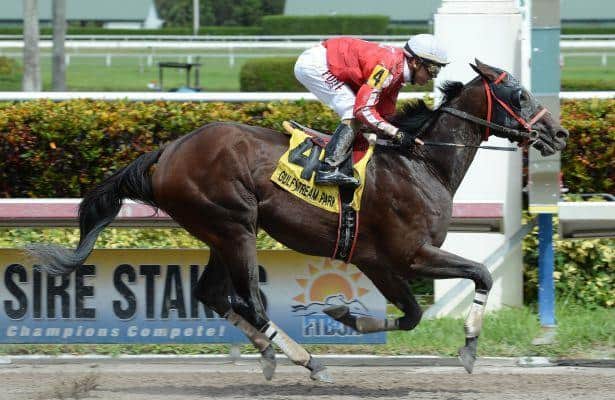 Yourdreamsormine has a walk so distinctive that some people who stop by his barn will ask, “How is Charlie Chaplin doing today?”

His duck-footed walk notwithstanding, Yourdreamsormine is a running machine. He enters Sunday’s $100,000 Mr. Prospector (G3) at Gulfstream Park in career-best form and in search of his first graded stakes win.

Owned by trainer Milt Wolfson’s N.T.S Stable, Yoursdreamormine arrived in his 84-year-old’s barn this past spring. A series of events led to the purchase of the soon-to-be 5-year-old son of Mr. Sekiguchi, who two years earlier was rejected by Wolfson when he saw him at an Ocala Breeders’ Sale.

“He was bought at OBS and then trained by Bill Kaplan, one of my best friends,” Wolfson said on a recent afternoon at Gulfstream Park. “Bill was retiring and the horse’s owner was looking to sell. Nobody wanted the horse because of that walk. Everyone that looked at the horse said to Bill, ‘What are you nuts? Put him back in the stall.’”

Wolfson, who operates a small stable in South Florida year-round, struck a deal with Kaplan that allowed him to take Florida-bred Yourdreamsormine, who at that point had won three of 22 starts and was a stakes winner, on a trial basis.

“Bill said there were several people looking at him for $25,000, but if no one wanted him he would sell him to me for $17,500,” Wolfson recalled. “I told Bill, “Let me train the horse for two weeks and I won’t charge you and I’ll see if I like him.

“I had him about 10 or 12 days, and I liked this horse,” he continued. “He’s gorgeous. He’s got heart. So I told Bill I would take him. I had him another three weeks and then I put him in a stakes race and he won. He’s just been a fantastic horse for me. He’s run eight times and we have four firsts, two in stakes, and four seconds.”

The Mr. Prospector marks Yourdreamsormine’s graded stakes debut, and it also represents a chance for Wolfson to earn his first graded stakes in 14 years. Wolfson trained for five years in the 1960s before changing direction and opening his own tack business. He went back to training in 1990.

Yourdreamsormine enters the six-furlong Mr. Prospector off a comfortable win in an optional claimer at Gulfstream Park run at the same distance. Wolfson believes his colt’s preferred trip is seven furlongs, but said the horse earned the right to take a shot in a graded race, particularly following his latest win.

And there is another reason that Wolfson, who has gotten off to a fast start at the Championship Meet with four wins from nine starts, is keen to see what New Year’s Day brings.

“If I can get him a graded victory — that’s another thing about running in this race — he is versatile and good enough and probably could stand as a stallion at someplace in Florida,” Wolfson remarked.

In the meantime, Wolfson he is enjoying the ride that Yourdreasormine has taken him on. He chuckled when he thought back to the early days when he was just becoming acquainted with the horse.

“He would run off with you in a minute,” Wolfson said. “First day he went out there he was galloping around and I saw the exercise rider pulling him up and I said, ‘Shoot.’ He came back to the barn walking the horse. I asked him what happened and he said, ‘I couldn’t hold him.’ We worked on him to correct that, but I can’t tell you my secrets.”

Earlier this year, Allen, a native of Ireland, left his job as the Racing Director for Arena Racing Company, which operates more than a dozen racecourses in the United Kingdom, to pursue his dream of becoming a horse trainer. The 43-year-old had conditioned a couple of horses recently in England, but it was more of a hobby than anything else.

“I decided to come over to America in June after I bought a small, little private training center up in Ocala,” Allen explained. “I quit a very good job in the UK to chase the dream.”

Spanish Squeeze is one of a few horses Allen has at his 147-acre facility in Marion County. The property was formerly owned by the late Joseph Greeley, a prominent owner and breeder of Thoroughbreds.

Allen trains Spanish Squeeze for W. Duff Gordon, James Bond, and Rascals Racing. The horse was previously trained in England by Hugo Palmer, who saddled him eight times for a record of 1-1-1.

Allen is hopeful that the addition of Lasix on Saturday will markedly improve the form of the gelded son of Lope de Vega.

“His three runs this year were pretty disappointing, so his owners decided to try him here,” Allen said. “He bled pretty badly in those races, so the only option for him was to try him with Lasix in America. He was once upon a time highly thought of by his trainer, Hugo Palmer, in England, but he picked up a lot of niggles and problems, although he has never had a serious issue.”

Spanish Squeeze, whose sole victory came in 2014 over Kempton Park’s synthetic surface in a mile race, will be tested for the first time — like most of his rivals in Saturday’s grass stakes — at two miles.

“He’s never run over a mile and a half,” Allen said. “But he’s a long-striding and big galloping horse. He’s a bit of a monkey in the stall, but once he gets out on the track he is very straightforward and easy to handle. Although, he does take some pulling up in the morning. The way he runs and trains, I just think the two miles will suit him and there aren’t too many of these races in America.”

Mandatory Payouts, New Year's Eve Free Party: Saturday will not only feature mandatory payouts on the 20-cent Rainbow 6, Pick 5 and Super Hi 5, but Gulfstream will play host to its annual free New Year's Eve Party in the Park.

And, of course, the New Year's Ball Rise from the walking ring fountain.