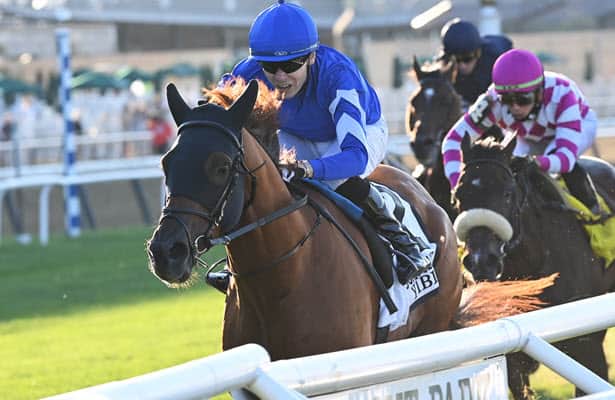 In victory, Yibir earned a “Win and You’re In” berth to the Grade 1, $4 million Breeders' Cup Turf in November at Del Mar.

The 12-furlong Widener turf test was the concluding leg of NYRA’s Turf Triple series for sophomores which included the Grade 1 Belmont Derby Invitational, won by the Aidan O’Brien-trained Bolshoi Ballet in July; and the Grade 1 Saratoga Derby Invitational won by State of Rest in August for trainer Joseph O’Brien.

Soldier Rising, runner-up in the Saratoga Derby, hopped slightly at the start and Yibir was in no hurry out of the gate as Tango Tango Tango led the seven-horse field through splits of 25.37, 49.45 and 1:14.46 on the firm turf, while under pressure from the Luis Saez-piloted Slicked Back.

Tango Tango Tango and Slicked Back continued their battle down the backstretch with Solider Rising, under Irad Ortiz, Jr., saving ground in third to the inside of Step Dancer and 2-1 mutuel favorite Bolshoi Ballet.

Solider Rising looked full of run through the final turn but was mired behind rivals as Yibir, who trailed throughout, was angled to the outside by Spencer late in the turn and quickly surged to the front with a powerful turn-of-foot. Soldier Rising found his path too late and launched a belated rally to complete the exacta as Yibir stopped the clock in a final time of 2:26.23.

Yibir (GB) romps in the Jockey Club Derby Invitational to secure his spot in @LonginesEq #BreedersCup Turf at @DelMarRacing! ??

Spencer, who won the inaugural Jockey Club Derby in 2019 aboard Spanish Mission, was full of praise for the talented Yibir.

“I was confident going in. He ran a good race and fared well in the stretch,” Spencer said. “I’m happy with his performance today. He’s a nice horse and it was a good trip.”

Appleby successfully raided the NYRA circuit this summer with one-two finishes by Godolphin-owned fillies Althiqa and Summer Romance in the Grade 1 Longines Just a Game in June at Belmont and the Grade 1 Diana in July at Saratoga.

A good run of form in North America continued for Appleby on Saturday when Godolphin's Walton Street captured the Grade 1 Canadian International at Woodbine Racetrack shortly before the Jockey Club Derby.

“We’ve been very lucky this season," said Appleby's travelling assistant Chris Connett. "Charlie’s horses have been in great form and he has placed them really well. We had a big winner today and then a Grade 1 winner up in Canada just 15 minutes before, so it’s a great time."

By Dubawi and out of the Monsun mare Rumh, Yibir is a full-brother to multiple Group 1 winner and 2018 Grade 1 Breeders’ Cup Filly and Mare Turf runner-up Wild Illusion. He entered from a 1 1/4-length score in the Group 2 Great Voltigeur on August 18 at York Racecourse.

Connett said he was a little concerned when Yibir was slow away from the gate.

“He can be a bit of a quirky character, so it was more of a matter of if he kept his head right. When they jumped out and wasn’t really going a lick, I thought ‘Oh, he’s never done that before,’, but Jamie gave him a great ride and coaxed him into it. Once he started to roll, he’s got some engine on him,” Connett said.

Ortiz, Jr. lamented not being able to get first run on Yibir.

“He ran well, he just got beat by a good horse,” Ortiz, Jr. said. “I wish I could get out earlier than the quarter pole. He takes some time to get going. When I finally got out of there in the clear, the other horse [Yibir] was full of run already. When he hit the clear, he started getting there. He took a couple of strides and he kicked on. No excuses, he was just second best. He’s a nice horse.”