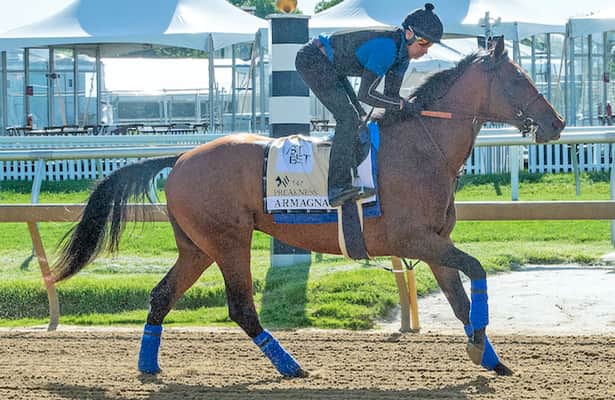 Yakteen, a man of few words when he is the subject, suddenly and reluctantly was cast into the spotlight in the days leading to his first Kentucky Derby. Reporters pressed the veteran conditioner about how Taiba and Messier were training. They asked whether Baffert might be violating his suspension by communicating instructions to his former assistant. No denial seemed to suffice as they asked again and again.

In sharp contrast, Yakteen is receiving very little attention as he prepares Armagnac for the $1.65 million Preakness Stakes on Saturday. Taiba and Messier are afterthoughts for now after faltering in 12th and 15th, respectively, in the Derby. Although Armagnac comes off an impressive allowance win, his punchless fourth-place Santa Anita Derby finish leaves him as a 12-1 long shot for the middle jewel of the Triple Crown despite having masterful jockey Irad Ortiz, Jr. aboard.

Yakteen, also a former assistant to legendary Charlie Whittingham, said he “very much” prefers to be under the radar at Pimlico Race Course. Typically, he did not elaborate.

He was far more effusive in discussing Armagnac, yet another quality 3-year-old transferred to him by Baffert. The bay son of Quality Road has taken some time to get to know.

Yakteen suggested that lack of familiarity might have contributed to the lackluster Santa Anita Derby result.. “There was quite a bit of pace in the Santa Anita Derby,” he noted. “We had opted to ride him a little bit differently than he probably preferred.”

A comment line in the past performances noted that Armagnac “pulled early,” during the Grade 1 Kentucky Derby prep race, suggesting he resented jockey Drayden Van Dyke’s bid to keep him behind the pacesetters. In the attempt to reserve the headstrong colt for a late run, that charge never came.

Van Dyke allowed Armagnac to largely dictate his preferred style in a May 8 allowance race at Santa Anita. The youngster, competing without blinkers for the first time, led at every point of call against significantly weaker competition in that 1 1/16-mile contest and rolled by 4 1/4 lengths.

“Armagnac was able to get into a really nice rhythm and flatter himself against that group,” Yakteen said. “He looked very confident and we think that is the confidence builder he needed to take that next step to this race.”

Armagnac drew post seven in a field of nine for the 1 3/16-mile Preakness. He figures to be prominent in a race that, on paper, suggests there will be a strong pace. “You’re playing the break,” Yakteen said of Ortiz’s task. “He’s going to be forwardly placed, no doubt about it.”

The former $210,000 yearling must overcome the shortest turnaround of any Preakness starter after shipping to Pimlico from the West Coast. “All signs right now are showing me he’s handling it great,” the trainer said. “We’re really happy with the way he’s shipped and the way he’s trained.”

Yakteen insisted he has not lost confidence in Taiba, a $1.7 million yearling making only his third career start in the Derby, or Messier.

“I think Taiba just showed his inexperience. When the dirt hit him, it was a challenge. It was something new and I think that impacted the overall outcome,” he said. “In regard to Messier, I think he was one of those horses that got pulled into a really quick pace. I thought he ran a giant race considering the fractions.”

Yakteen was quoted after the Derby as saying the mile-and-a-quarter classic suggested Messier has distance limitations. He denies making such a comment and noted that the “rocket pace” made it difficult to evaluate any of the still-developing runners.

“He hasn’t proven to me that he can’t do it,” the trainer said, “and I think he will prove to us that he can do it.”