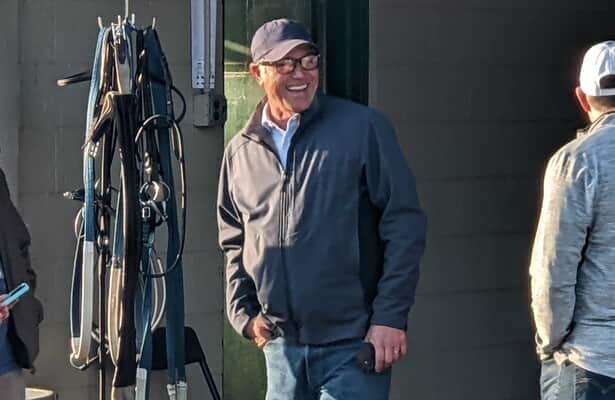 At about two minutes after 8 a.m. EDT on Monday, Tim Yakteen greeted the assembled media for the first time since he arrived at Churchill Downs for Kentucky Derby 2022.

“I’m just going to take a video,” he said, pointing his phone at the gaggle. “My boys won’t believe it.”

About four minutes later, the questions edged into Baffert land. How did it happen? How did you feel? Are you talking to Bob? What do you think?

They were questions Yakteen had been anticipating long before he got to the barn Monday morning. Maybe about as long as it has been since Taiba and Messier were transferred to him in late March after Baffert, the colts’ original trainer, was unsuccessful in his legal attempts to overturn his suspension.

“My wife had spoken to me and tried to prepare me so I didn’t look as bad as I can,” said Yakteen, who is married to XBTV host and interviewer Millie Ball. “She tried, so you can tell her whether she did a good job or not.”

At once good natured and close to the vest, Yakteen was guaranteed of being in the eye of a year-old storm after Taiba and Messier finished 1-2 last month in the Santa Anita Derby (G1). That result gave them the points they needed to qualify for the Kentucky Derby, a race for which they would have been ineligible had they stayed with Baffert. The Hall of Fame trainer is absent because of the drug test Medina Spirit failed after winning last year’s Derby, a victory that was taken away this winter by the Kentucky Horse Racing Commission.

Yakteen said he is focused not on that turbulent past but on the very immediate future.

“I was very excited, honored, willing to take the opportunity,” he said of the calls he got from Messier’s racing manager Tom Ryan and Taiba’s owner Amr Zedan. “It’s the pinnacle of any trainer’s career to compete in the Derby.”

Yakteen, 57, has been down this road before when he was an assistant. Not to Baffert but, instead, under the late Charlie Whittingham, most notably with 1994 runner-up Strodes Creek, not with Derby winners Ferdinand or Sunday Silence.

“I wish I was, but that was before my time,” Yakteen said. “And I didn’t come out here with those Derby horses that Bob campaigned.”

The barn is a temporary home two rows away from where Baffert used to hold court. Physically it is not far. Symbolically and verbally, Yakteen repeated what he said last week from California. He is keeping his distance from his old boss.

“I have not,” Yakteen said when asked if he had spoken to Baffert since the transfer in late March.

He was more expansive when asked about the idea that the two Baffteen horses in the Derby may be viewed more as Baffert’s than his.

“I didn’t really throw a whole bunch of credence (in that),” he said. “I didn’t feel one way or the other. Everybody has their own opinion. I’m not looking to sway anybody else’s thoughts. I’m going to enjoy myself here and my journey.”

Asked if it is difficult to see Baffert, his colleague and his friend, going through the swirl of controversy he has endured in the past year, Yakteen answered brightly but quickly.

Oh, there was the matter of Messier and Taiba, who had their final pre-Derby breezes back home at Santa Anita late last week. After arriving at Churchill Downs on Sunday, they got their first licks over the track Monday. Messier went out at about 5:30 a.m. Taiba was among the Derby and Oaks horses who had their own 15-minute training window starting just after 7:30 a.m.

“A straightforward morning, very easy,” Yakteen said. “Messier went out early and galloped just around a mile. Same thing with Taiba. It was just a normal, routine gallop.”

Even though he has more track experience than his stablemate, Messier was sent out before dawn to accommodate one aspect of his personality.

“Messier can get a little bit strong,” Yakteen said. “I wanted to take him out when it was dark and quiet.”

Normally, though, Messier is the cooler customer around the barn.

“(He) is very laid back,” Yakteen said. “The other one (Taiba) has got a little more juvenile to him. I wouldn’t want to turn my back on him. He might tell you that he’s standing back there.”

The two horses might switch places when it comes to workout times Tuesday. That is when the National Weather Service said there is a 90 percent chance of up to a half-inch of rain with the possibility of a thunderstorm after 5 a.m.

Asked whether a wet track would alter his training schedule, Yakteen said, “It could, depending on the surface. But I think Churchill does a pretty good job, so I’ll have to play that by ear.”