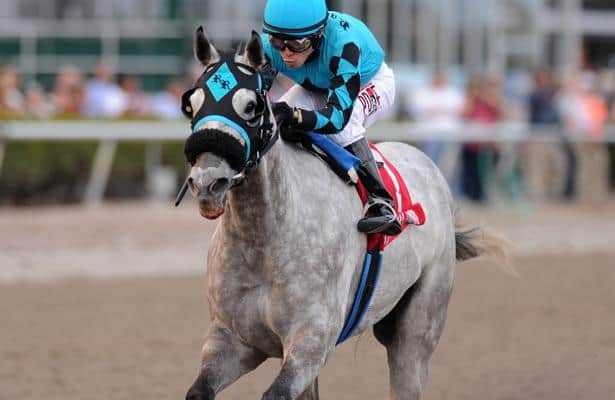 Trainer Jorge Navarro said Wednesday that X Y Jet, a likely favorite for this weekend’s De Francis Memorial Dash at Laurel Park, will bypass that spot after healing from a recent incident of curb, a ligament swelling in the horse’s hock.

The 6-year-old son of Kantharos has overcome multiple surgeries for more daunting injuries to continue running at a high level. X Y Jet is back in training, Navarro said, and approaching his first workout since August.

“It’s nothing serious,” the trainer added. “We caught it in time, and you know the story of X Y Jet. We baby him. Anything that comes up, we are making the right call for him.”

“If he’s ready, we’re going there, and if not, then we could go straight to the Breeders’ Cup,” said Navarro, a recent record-setting trainer at Monmouth Park’s 2018 meeting. “If we think the race is way too tough, then we’ll pass it.”

The gray sprinter has won four of five starts since ending a layoff of more than a year in the Dec. 3 Mr. Prospector (G3) at Gulfstream Park. The only defeat came when he shipped and ran a close second to Mind Your Biscuits in the Dubai Golden Shaheen (G1).

“Listen, he’s done everything for us,” Navarro said. “We’ve had a bunch of good times with the horse. It’s about spotting him the right way. Just getting to a race with him, that’s good for us.”