Works report: Charge It returns to training after foot abscess 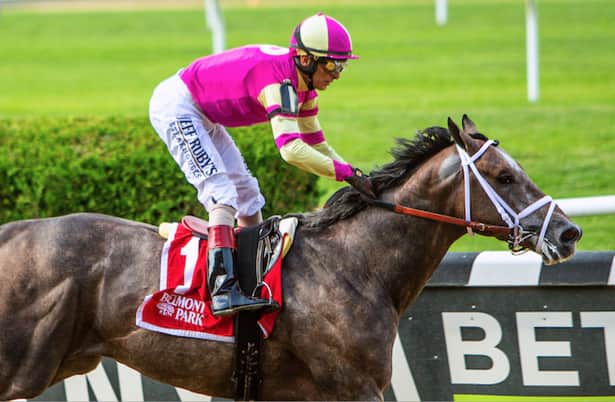 Charge It, the 23-length winner of the Dwyer (G3), returned to the work tab Tuesday morning. He worked four furlongs in 49.21 seconds over the Belmont training track, his first published drill since Aug. 13. He had been preparing for a start in the Travers (G1), though a foot abscess derailed his plans.

Get Power Picks for every track
According to David Grening of the Daily Racing Form, Charge It will target the Kelso (G2) at Aqueduct on Oct. 29 for his return. If he does make that goal, would be Charge It's first start against older horses.

These three graded-stakes winners has posted works Tuesday morning. For information about where they and other racing stars may be headed soon, visit the Horse Racing Nation Stakes Schedule.

Charge It (Tapit), a Grade 3 winner (2022 Dwyer), worked four furlongs in 49.2 seconds at Belmont Park on Tuesday morning. It was the 14th fastest of 29 works at the distance. His previous work was 45 days ago going five furlongs at Saratoga. In his last start he won the Dwyer (G3) going one mile on the main track at Belmont Park on July 2 for trainer Todd Pletcher.

Chi Town Lady (Verrazano), a Grade 1 winner (2022 Test), worked five furlongs in 1:02.8 at Keeneland on Tuesday morning. It was the fourth fastest of five works at the distance. Her previous work was seven days ago going four furlongs at Keeneland. In her last start she won the Test (G1) going seven furlongs on the main track at Saratoga on Aug. 6 for trainer Wesley Ward.

Army Wife (Declaration of War), a Grade 2 winner (2021 Black-Eyed Susan), worked five furlongs in 1:01.2 at Churchill Training on Tuesday morning. It was the fastest of 4 works at the distance. Her previous work was seven days ago going five furlongs at Churchill Training. In her last start she placed fifth in the Summer Colony going 1 1/8 miles on the main track at Saratoga on Aug. 19 for trainer Mike Maker.