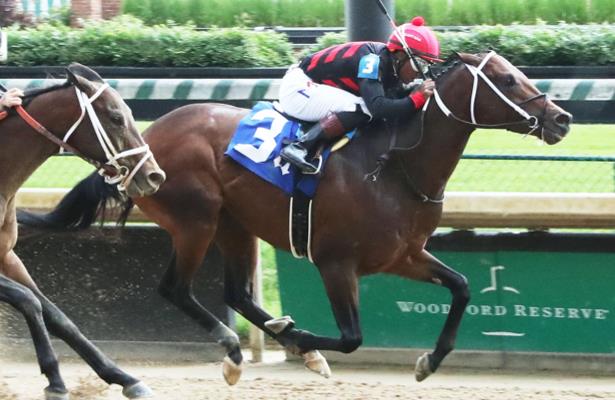 The odds-on favorite in a six-furlong event, Echo Town turned back the rally of Digital to hit the wire in 1:09.05. Stakes placed earlier this season at Oaklawn Park, Echo Town will make his first start in graded company next out on the Belmont Stakes undercard.

“That’s kind of what we’re looking at,” Levinson said of the Woody Stephens. “I talked to (trainer) Steve Asmussen last night, and he wanted to wait and kind of see what all the other schedules looked like before we commit, but we are going to nominate for it.”

Levinson said connections have no plans to test Echo Town going longer on the extended Kentucky Derby trail. In this son of Speightstown, they know what they have in the $100,000 yearling purchase.

“We’re going to try to keep him within himself,” Levinson said. “He looks really fast. I don’t think we’ve ever had a speedball like this.

“I think we’re going to keep him to one-turn miles. That’s about the most he’ll want to do. I think he’s running so well there’s no use in complicating the situation. Trying to stretch him out, you’ll never know what happens.”

Next up, Woody Stephens Stakes?

Echo Town has won three of his five career starts. The only defeats came in a gritty stretch battle with Long Weekend in Oaklawn Park's Bachelor Stakes in February, along with a third in his first try against winners earlier in that meet.

“He’s 5-for-5 in the money,” Levinson said. “ I think the race he ran third in he got a bad trip. He got shuffled back on the turn. I also think Long Weekend is probably one of the better sprinters in the country, along with ours.”

Levinson feels his colt is maturing and his mental approach to racing is strengthening.

“He’s an interesting horse,” Levinson said. “He started out rating, but now he looks like he wants to run from the front. I think that’s a sign he’s getting better. He seems like he digs in. Even the race he lost to Long Weekend he was trying but the other one was just better that day.”
Echo Town