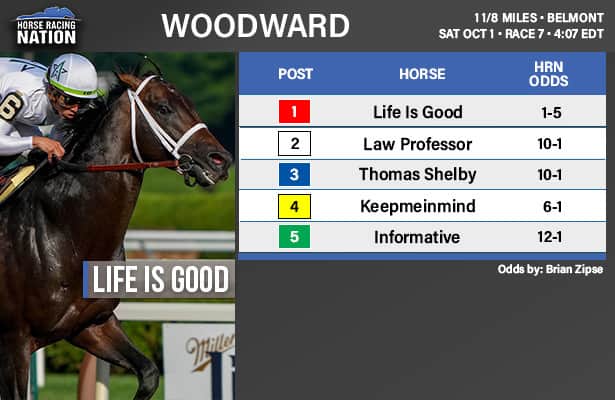 Life Is Good is expected to be an overwhelming favorite in the Grade 1, $500,000 Woodward, which will be run on Saturday as part of the Belmont at the Big A meeting. With eight victories in 10 career starts, Life Is Good will race the 1 1/8-mile distance around two turns at Aqueduct.

Get expert picks for Belmont at Aqueduct

Todd Pletcher is the only trainer in the field with a victory in the Woodward, and he used the race as a stepping stone to the Breeders’ Cup. Pletcher won the Woodward three times with Liam’s Map, Quality Road and Lawyer Ron.

Click here for Belmont at Aqueduct entries and results.
Here is a full-field analysis for the Woodward with morning-line odds provided by the Horse Racing Nation staff. The Woodward is carded as race 7 of 11.

1. Life Is Good (1-5 – Into Mischief – Todd Pletcher / Irad Ortiz Jr. – 10: 8-1-0 - $4,086,700) Life Is Good was last seen beating a strong field in the Whitney (G1) that included Americanrevolution, Hot Rod Charlie, Olympiad and Happy Saver by two lengths with his usual front-running style. The field in the Woodward does not come close to the quality of horses he beat in August at Saratoga. Aqueduct will become the seventh track at which he has run. Life Is Good was an odds-on favorite in all 10 of his races. He won both of his starts at the nine-furlong distance. Top choice, heavy favorite.

2. Law Professor (10-1 – Constitution – Rob Atras / Jose Ortiz – 11: 4-1-1 - $514,240) Law Professor won a $400,000 stakes race at Kentucky Downs in September in his first start for trainer Rob Atras. That was his second victory on the grass, having won a Del Mar allowance in November. His main-track wins were at Santa Anita when he broke his maiden and then an off-the-turf score in the Mathis Mile (G2). Between then and the recent Tapit, Law Professor raced on both turf and dirt, including a second in the San Pasqual (G2) on the main track. After running last in the Oaklawn Mile (G3), the 4-year-old moved from the barn of Michael McCarthy to that of Atras. Contender for second.

3. Thomas Shelby (10-1 – Curlin – David Jacobson / Jose Gomez – 30: 11-4-5 - $600,563) This 6-year-old son of Curlin has 11 career victories, but none of them was in a stakes race. At the 2022 Oaklawn Park meeting, he had his best results when he used his speed to get the lead and finished second in the Razorback (G2) in February, but that was for trainer Robertino Diordoro. After running seventh in an allowance at Horseshoe Indiana, Thomas Shelby moved to the barn of David Jacobson. In his first start for the new trainer, he won an upper-level allowance at Monmouth on the front end by more than four lengths. Toss.

4. Keepmeinmind (6-1 – Laoban – Todd Pletcher / Joel Rosario – 13: 2-3-2 - $843,237) Keepmeinmind moved to the barn of Todd Pletcher for a 2022 campaign that began in Saratoga in July, when he got his second career victory in a two-turn allowance with his usual closing move. The 4-year-old returned to Grade 1 racing in the Jockey Club Gold Cup, where he finished fifth. He is known for getting his maiden win in the Kentucky Jockey Club (G2) as a 2-year-old, which launched him on the Kentucky Derby trail. Keepmeinmind made seven starts as a sophomore and was usually competitive down the stretch. Contender for second.

5. Informative (12-1 – Bodemesiter – Uriah St. Lewis / David Haddock – 35: 4-3-3 - $527,040) This 5-year-old is the winner of the Philip Iselin (G3) at Monmouth Park in his most recent start in August. His other stakes victory was in the Salvator Mile (G3), which also was at the Jersey Shore track. The Parx-based runner has shipped to New York in the past as a long shot in graded stakes races without any recent success. Toss.

Summary: Life Is Good exits a victory in the Whitney at Saratoga against a field that was far more competitive than the four other horses he will face in the Woodward. Ranked as the second best Thoroughbred in the recent NTRA poll, he is the only Grade 1 winner in the field. It is hard to come up with any reason that Life Is Good will not pick up his ninth win and the others are racing for spots in the exacta and trifecta.

Law Professor and Keepmeinmind have a class edge over the rest of the field and are likely to finish in second and third. They both will come from off the pace but will probably be far behind Life Is Good.

Frankly, the Woodward is the kind of race on which I will be a spectator only. When Life Is Good wins, the vertical wagers will offer small payouts that are not worth wagering unless you play a single ticket.