Woodfield Springs at Home in Transylvania 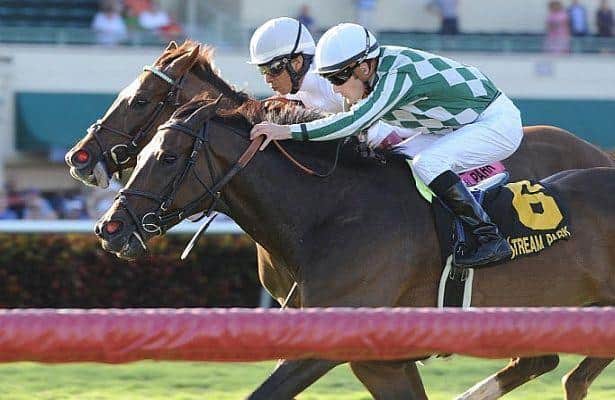 By all rights, G. Watts Humphrey Jr.’s Woodfield Springs should be right at home Friday when he goes postward in the 26th running of the $100,000 Transylvania (G3) for 3-year-olds going 1 1/16 miles on the turf.

Woodfield Springs is the first foal of Communique, winner of the 2008 Bewitch (G3) and runner-up in the 2009 Bewitch.

“She was one of my most favorite horses in my barn,” trainer Rusty Arnold said of Communique, who compiled a record of 23-4-5-3 for earnings of $594,841. “She didn’t win a lot races, but she did beat a lot of fine fillies. She ran second in the Beverly D. (G1); got beat by a (Christophe) Clement horse (Mauralakana).”

Arnold trains Woodfield Springs, who broke his maiden in his most recent start under Julien Leparoux, who will be aboard Friday.

“I have really, really liked him all along,” Arnold said. “They are both about the same size; not real big but not small, and they both have great minds. He was getting ready to run last fall here or Churchill but had a shin problem and that delayed his debut until late December.”

Woodfield Springs finished third in his debut on grass and was fourth on the dirt before breaking his maiden on grass.

“His first race was good and his dirt race was OK and I may try him on dirt again,” Arnold said. “I was training him for the (Toyota) Blue Grass, but he is 18th in earnings of horses considering the race so he probably would not get in and so we’ll go Friday.”

Rain is in the forecast for the next two days and Arnold would not be overly wrought should the race be moved from the turf to the all-weather main track.

“Communique had a first and second in her two starts on the Polytrack here,” Arnold said. “And the only time his sire Raven’s Pass ran on the all-weather, all he did was win the Breeders’ Cup Classic (G1).”

In addition to Woodfield Springs, Arnold hopes to make waves this meet with Centre Court in the $300,000 Jenny Wiley (G1) on April 12 and Zinzay in the $100,000 Appalachian (G3) Presented by Japan Racing Association on April 17.

Centre Court will attempt to join Intercontinental (GB) (2004-2005) in winning the Jenny Wiley in consecutive years. She won her 2014 debut in the Honey Fox (G2) in March off a long layoff.

Arnold never lost hope that Centre Court would return to the form that had carried her to five graded stakes victories prior to 2014.

“It didn’t get to that point,” Arnold said. “After Saratoga, we figured we could find out what the issue was and correct it if it was not major. We sent her to Dr. (Larry) Bramlage and he found a pulled muscle in behind.

“We gave her four months off and she came back as a new horse. The plan was to run in the Honey Fox and Jenny Wiley like last year and if she ran well, run her all year. If not, Plan B was to breed her but hopefully we can be on Plan A all year.”

Zinzay finished second as the favorite in the JPMorgan Chase Jessamine (G3) here last fall in her second start and then ran second to Central Bank Ashland (G1) entrant Resistivity in her 2014 debut on March 15 at Gulfstream.

“She has come back good,” Arnold said. “Her first race back was good. She didn’t win, but it was a good race and she got a little tired. She is on track for the Appalachian.”