Woodbine’s top rider has had his patience tested in 2021 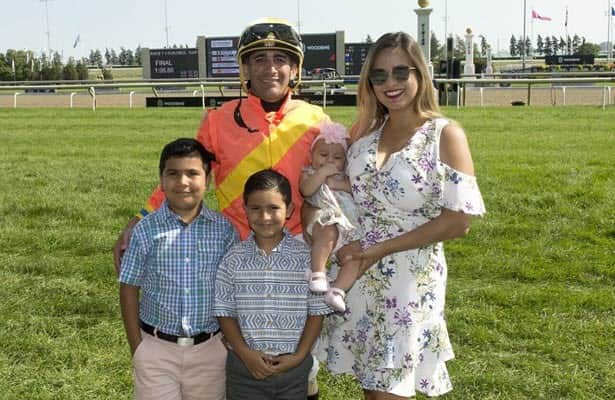 Where America has opened up, the COVID lockdown has lingered longer in Canada. And longest in the province of Ontario.

It is why restaurants and bars there have been slow to reopen, the Raptors and Blue Jays have been stuck playing all their games south of the border, and the racing season at Woodbine started eight weeks late.

“We were the first one that closed, and the last one that opened,” jockey Rafael Hernández said. “You see in other provinces, they opened before Ontario.”

Hernández was patient. The 36-year-old native of Puerto Rico was coming off the best season of his career, winning a riding title in his fifth year at Woodbine and being voted a Sovereign Award as Canada’s best jockey of 2020.

“Everything was looking good until the last race,” he said.

Aboard the 4-year-old filly Super Jade, Hernández looked like he had a horse full of closing speed in the turn for home. As she made her move through wide traffic, Super Jade clipped heels with a rival and took what proved to be a fatal fall.

Hernández rolled onto the all-weather track and was sore, and he rode a full card the next day, even adding another win. But by Monday, he knew something was not right.

“I wake up, and I start coughing, and it hurt just a little bit on the left side of the ribs,” Hernández said. “I went to the hospital to get some X-rays. They did an MRI, and they told me the rib was OK. It was just an internal bruise. But they found a little hairline fracture in the spine, and they told me to relax and settle down for between three and five weeks.”

In a telephone interview with Horse Racing Nation and the VSiN racing podcast, Hernández said he injured the L2 lumbar vertebra in his lower back, the second spinal bone below the rib cage.

So after sitting idle through the protracted lockdown in Toronto, Hernández has to wait some more. He shrugged it off as being “part of the game.” Not so for his mother, who hopes Sunday’s spill moves him one step closer to getting off horses and going upstairs with racing officials.

“I always want to be a steward, right?” he said. “I called my mom, and she told me, ‘You can start to be a steward as soon as possible.’ I said, ‘Nope.’ She said, ‘I don’t want you to be a jockey anymore.’ But I told her, ‘That’s what I want.’ Moms are overprotective, you know? My wife, too.

Sounding confident he will be back on horses by the middle of next month, Hernández was eager to recapture the momentum that took him to a career-high strike rate of 20 percent last year at Woodbine, where he teamed mostly with Hall of Fame trainer and 12-time Sovereign winner Mark Casse.

“I appreciate every opportunity he gave me,” Hernández said. “He’s a great guy to work for, and every time we talk on the phone, he gives you the confidence to do your own thing.”

Where Casse was more hands-off, Chad Brown is more hands-on. That was just fine last year, when the then-4-year-old filly Étoile was shipped to Woodbine and needed a rider for a couple races. Hernández got the assignment, finishing the job with a victory last October in the E. P. Taylor Stakes. That Grade 1 triumph was 17 years in the making for Hernández.

“I talked with him on the phone before the race,” Hernández said. “He gave me some instructions, and everything came good. I really appreciate that first Grade 1 winner. That’s one more to write in the book.”

In the meantime, Hernández is on the mend and spending almost all his time with his wife and three children, ages 12, 10 and 3. When he is well enough to be back on his feet, and when he is not racing, Hernández maintains a love affair not only with his family but also with the country he has called home for going on six years.

“I like hiking, biking and going to new trails with my kids,” said Hernández, who rode this past winter at Turfway Park near Cincinnati. “Canada is more relaxed. When I used to be in Florida it was rough. Here you’ve got more family time.

“And Canada is multicultural. You learn different cultures. Kids, too. My kids have friends from everywhere. Japan, Brazil, a lot of places. That’s helped them to grow up and be a better person.”

Even with everything on offer away from the track, Hernández is eager to get back in the saddle. He said he goes in for a follow-up MRI late this month, when he hopes he will be cleared to resume riding sooner than later at a track he has come to appreciate.

“If it’s not the best, it is one of the best racetracks in North America,” he said. “Especially the E. P. Taylor (turf course). Even the new surface we have with the inner turf, it’s like a golf course. I love it.”