Woodbine: War Bomber leads all the way in Seagram Cup 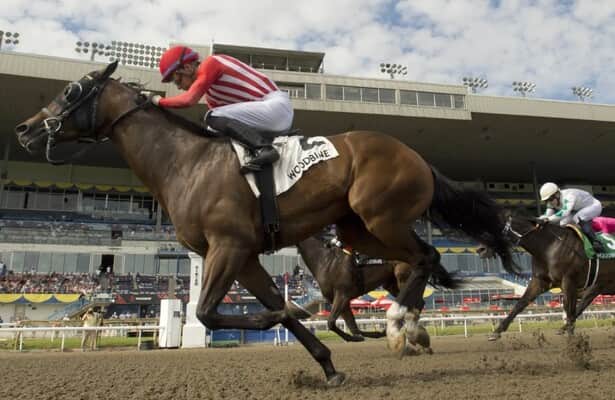 A fast-closing Artie’s Storm rallied to secure second, a length ahead of Clayton. Frosted Over was fourth.

The opener from Del Mar is up next! Get your wagers in at https://t.co/nBYFHj6ufh! pic.twitter.com/t8thvwZfPR

Owned by Bruno Schickedanz, trained by Norm McKnight and ridden by Sahin Civaci, War Bomber took charge from the outset of the 1 1/16-mile event on the main track, rushing to the lead as Clayton followed in second. Also trained by Mark Casse, last year's Seagram winner Tap It to Win was third and Frosted Over was fourth early.

Reaching the opening quarter in 23.92 seconds, War Bomber held a half-length advantage over Clayton, and Tap It to Win and Frosted Over maintained their third and fourth positions.

As the field came off the turn for home, Clayton announced his presence and soon matched strides with War Bomber. The front-end battle continued until the late stretch as the latter pulled away along the inside to register a three-quarter length score at a time of 1:43.26.

“Bruno and the trainer were planning to go to the lead,” Civaci said. “I was anticipating (jockey) Emma (Wilson) and the shipping horse (Carrothers) might take the lead or one of Casse’s horses, so I was going to play the break, and no one was sending, so I sent and had an easy pace up front.”

Civaci, aboard the 4-year-old son of War Front for the first time, felt at one point his charge might have emptied the tank. He soon got his answer.

“Around the turn he got a little lazy on me, so I thought he was giving up as (Clayton) came alongside,” Civaci said. “But he fought back.”

Bred by Coolmore, War Bomber is 11: 5-0-1. The Seagram Cup was his second stakes win and first graded. In September the bay gelding won the Toronto Cup Stakes.

“This is one of the best-bred horses in all of Canada,” Schickedanz said, “so he’s got the natural right to be where he is. He had a couple of extra gears, and hopefully we can nourish those gears and get more out of him.” ?