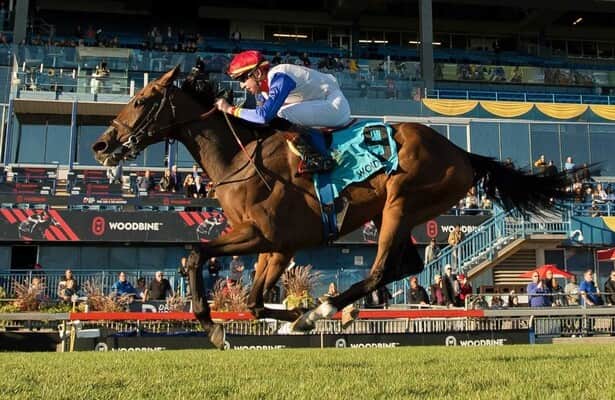 It was sweet redemption for the connections of Sir for Sure, who closed the curtain on this year’s Canada Triple Crown with a command performance in the US$290,284 Breeders’ Stakes on Sunday at Woodbine.

After a forgettable experience in the Prince of Wales, the second jewel in which Declan Carroll fell off the son of Sligo Bay into the first turn, the jockey took to Twitter soon after and shared, "We will live to fight another day."

On a beautiful autumn afternoon at Woodbine, Carroll and Sir for Sure lived up to those words.

Gaston, who had not run in either the Queen’s Plate or Prince of Wales, broke alertly and was joined by Duke of Love, winner of the latter race, on the front end. Sir for Sure was eighth of nine through an opening quarter of 24.94 seconds in the 1 1/2-mile test over a firm turf course.

The lead pair were still tussling on the front end through a half reached at 49.09 seconds. Carroll maintained a patient hand on the Plate Trial winner with the duo running comfortably along in seventh.

It was Gaston on top by a head after a mile, keeping that advantage after a mile and a quarter. Sir for Sure, sixth choice in the betting at 6-1, began to pick up the pace, and was a menacing presence in third.

A half-length in front turning into the stretch, Sir for Sure began to power away from his rivals as stablemate, fellow Mark Casse trainee and Queen's Plate runner-up Hall of Dreams, came with a strong late run along the rail.

At the wire, Sir for Sure, bred and owned by René and Darlene Hunderup, was a 2 1/4-length victor. Hall of Dreams completed the Casse exacta, and Lac Macaza was third. Dancin in Da’nile finished fourth but was relegated to seventh for interference in the stretch, elevating Gaston to complete the top four.

Kathryn Sullivan, assistant to Casse, was thrilled to see the bay gelding, third in the Plate to Moira, back on track.

“It’s so exciting,” Sullivan said. “I’m almost in tears. I’m so proud of him. It was great to get him to come back and be able to run the race. That’s all you want is just your horse to go out there and run the race. And he got to do that today, and we got to see how good he is. It’s wonderful.

“These owners are so wonderful. They do everything. They’re in the stalls mucking. They’re so hands-on. Just a great win for them. So proud of Declan. He rode a great race. And I’m really proud of our other horse who was second. It was so exciting.”

For Carroll, riding in his first Breeders’, it was an equally satisfying outcome. Any disappointment over the Prince of Wales was in the rear-view mirror.

Casse added a third Breeders’ Stakes victory to his name. The dual Hall of Fame conditioner also won with Marchfield in 2007 and with Neepawa in 2018.