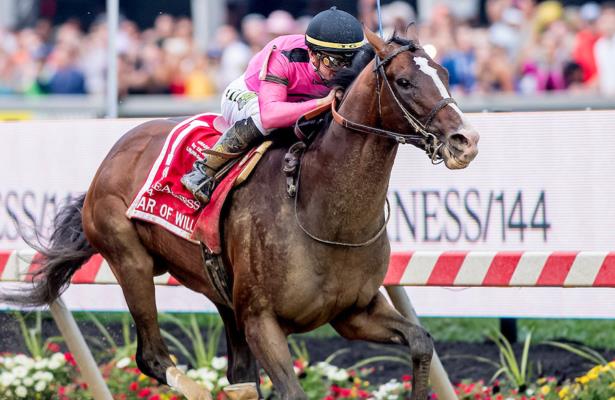 Live coverage will be available with America's Day at the Races on FOX Sports and MSG Networks. Free Equibase past performances for the Cross Country Pick 5 sequence are now available for download at https://www.nyra.com/belmont/racing/cross-country-wagers.

A full field of maiden 2-year-old fillies will start the action with Belmont's Race 7 at 4:08 p.m. EDT.

Stone Town, trained by Hall of Famer Bill Mott, ran twice during the just-concluded summer meet at Saratoga Race Course, including a second on debut July 19. The daughter of Tapizar was a $130,000 purchase at the 2019 Keeneland September Yearling Sale.

Other contenders in the one-mile turf contest include the French-bred Frankel At Ascot, who was purchased for nearly $600,000 in 2019 and is now owned by Gary Barber. The daughter of Frankel, trained by Hall of Famer Mark Casse, made her debut at Belmont on July 9, running third. The Irish-bred Amortization, conditioned by Chad Brown, will make her first career start in a field that has 12 entrants and four also-eligibles, while Brynbella will go for trainer Todd Pletcher.

Tiz a Slam will look to repeat after capturing last year's edition en route to a 2019 that saw the son of Tiznow win three straight stakes, starting with the Louisville (G3) at Churchill Downs. After winning the Singspiel, Tiz a Slam won again at Woodbine next out, taking the Nijinsky (G2). Trained by Roger Attfield, Tiz a Slam has six graded stakes wins on his ledger and will be looking to become a winner at that class as a 3, 4, 5 and now 6-year-old.

Monmouth will host the third leg with a 1 3/8-mile turf route in Race 10 at 4:41 p.m. A full field of 12, with two also-eligibles on the docket, will compete in a starter handicap for 3-year-olds and up.

He Will, trained by Hall of Famer Jerry Hollendorfer, won at Monmouth on July 18 and followed with a runner-up effort at the same track Aug. 22 last out. Duc de Calas, conditioned by Christophe Clement, will be making his first start since March at Gulfstream Park, where he ran second against allowance company. After not racing in 2019, Duc de Calas ran out of the money in his first two starts this year before hitting the board last out.

A seven-furlong turf sprint will mark the return to Belmont for the fourth race in the wager in Race 9 at 5:14 p.m. Ten New York-bred 3-year-old and up contenders, and three main-track only entrant, will vie for supremacy.

Noble Emotion, trained by Jonathan Thomas, has won two of his last three starts, including last out against allowance company Aug. 21 at Saratoga that marked his 2020 debut and first race off a 10-month layoff. The Clement-trained Maxwell Esquire has finished on the board in four of his last five starts.

The $1 million Woodbine Mile (G1) will conclude the wager in Race 9 at 5:39 p.m. War of Will, the 2019 Preakness winner for Casse, will now look to win a second Grade 1 on turf in addition to his victory in an American Classic.

The Woodbine Mile, a "Win and You're In" qualifier for the Grade 1 Breeders' Cup Mile in November at Keeneland, will also see Casse send out March to the Arch, who is coming off a 2 1/4-length score in the King Edward (G2) at Woodbine on Aug. 15.

Starship Jubilee, the defending Canadian Horse of the Year, ran fourth last out in the prestigious Diana (G1) at Saratoga. The 7-year-old mare will look to best males, and she takes on that class in a stakes for the first time since running sixth in the 2017 Sky Classic (G2). Starship Jubilee, trained by Kevin Attard and bred in Florida, is 18-5-3 in 37 career starts with earnings of more than $1.6 million.

The Cross Country Pick 5 will continue each Saturday throughout the year. For more information, visit NYRABets.com.