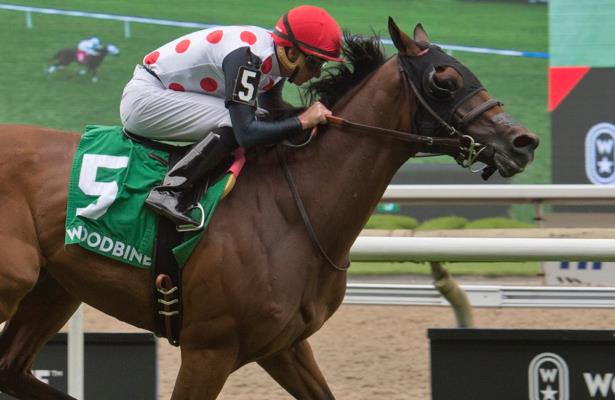 This year's Woodbine Mile (G1) field was spiced up by the entry of star mare Starship Jubilee and potential star three-year-old Shirl's Speight. Though the backgrounds of the runners in this year's field vary drastically, they share one common goal, a ticket to the Breeders' Cup Mile. We asked those most familiar with racing at Woodbine to weigh in with their opinions on the big race below.

You have to respect the Maker's Mark Mile champ but it's not like he's unbearable. My money is on the up and comer Shirl's Speight who could be any kind. The sophomore could've broken the course record in his debut if asked. His tactical speed gives Kimura options and he might get a nice pocket trip. It is a big ask for a lightly tested three-year-old, but the unbeaten colt just might be up to the challenge.

The “other Casse” isn’t as power an angle as the other Baffert or other Brown or other “insert trainer name here,” but it might be the right angle in the Woodbine Mile, as the Racing Hall of Fame conditioner sends out both classic dual-surface Grade 1 winner War of Will and the lesser known Olympic Runner. It’s the former charge I’m most interested in, as this one looks the right price (15-to-1 morning line) to find out if he’ll have the necessary pace to run at.

War of Will is my most likely winner, but the name recognition from his resume and trainer is enough to make me think he will be underbet. Olympic Runner’s best races have come on synthetic, but his current form coupled with stretching out make him a play for me at this price.

I like March to the Arch to win The Woodbine Mile. Mark Casse has a strong contingent going in this year’s Mile and Owners Live Oak Plantation will get the job done as these connections won the Mile in 2017 with World Approval. March to the Arch is 2 for 2 on the Woodbine Turf. He ran well in the King Edward (G2), and gets veteran Woodbine rider Patrick Husbands. I’ll put 1 on top of the Tri with the 3 Shirl’s Speight, 4 Starship Jubilee, 6 Admiralty Pier and 8 War of Will underneath.

There is a case to be made for every runner in this year’s $1M Ricoh Woodbine Mile which creates a double edged sword. Each of the eight entrants has good credentials, making the Grade 1 million dollar feature a compelling contest but a bit of a head-scratcher for the handicapper. Being an automatic “Win and You’re In” for the $2M Breeders Cup Mile, the Ricoh Woodbine Mile has proven to be a great springboard in the past, especially for the leading barn of Mark Casse who is hoping to secure a spot at Keeneland this fall for one of his three runners.

War of Will began his career on turf at Woodbine as a 2YO with a big reputation that he did live up to as a 3YO with a comfortable win in the Preakness Stakes. It has taken over a year for him to get back to the winner’s circle which he did in his most recent start on turf at Keeneland with a win in the Grade 3 Maker’s Mark, albeit by a nose. At four years of age, War of Will comes into this race relatively fresh off a turf campaign. The colt represents a good combination of power and speed but may well be overbet.

March to the Arch has shown an affinity for Woodbine as was first evidenced in his 2018 campaign here and again five weeks ago when winning the Grade 2 King Edward at this trip. The 5YO put it all together that day, emerging from the back of the field with great acceleration, sustaining his closing kick to mow down the pace-setters for a runaway victory. He does rely on a hot tempo to produce his best which he must replicate.

Olympic Runner comes into the race off two eye-catching seconds to local legend Pink Lloyd. His previous performances indicate that he can handle the turf which is no surprise given his sire is Gio Ponti. The broader question is whether Olympic Runner is more of a late-closing sprinter than a miler. This season, as a 4YO, he has looked particularly sharp, especially when smothered up early then allowed to uncork. So often it is the “other” Mark Casse runner who wins, sometimes even, the “other, other.”

A STAR WAS BORN

Starship Jubilee is a local fairytale story, having risen through the claiming ranks for trainer Kevin Attard to be named 2019 Horse of the Year. Her star has kept shining in 2020, rattling off a series of four consecutive stakes wins on turf in the States, culminating in the Grade 2 Ballston Spa at Saratoga. Last time out, the gloss appeared to be slightly off when fourth in the Grade I Diana where she was again facing a tough group but she sports a sharp recent work. Her turf record at Woodbine speaks for itself and now Starship Jubilee takes on the boys.

IN SPEIGHT OF IT ALL

Shirl’s Speight is without doubt the X factor in this field. His debut on turf at seven furlongs was sensational, disposing of Just Like Larry by eight lengths - coincidentally the same horse that War of Will had run third behind in his Woodbine debut as a two-year-old, while the precocious Belichick, third that day, belied his odds in the Queen’s Plate last weekend with a closing second. Shirl’s Speight is out to defy his critics who feel the jump up may be too much and yet his second career win in the Marine Stakes was to have been a springboard to the Kentucky Derby. Owner Charles Fipke and trainer Roger Attfield have an exciting young prospect here who could take them all the way.

Trainer, Barbara Minshall will be hoping to follow in the footsteps of Gail Cox who trained last year’s upset winner, El Tormenta. Admiralty Pier looks the best of the Barb Minshall pair. Even though he has also been entered in the Singspiel Stakes the same day, it is the mile to which he looks better suited. Yes, the waters are deeper but the 5YO is racing well and he does have a win over March to the Arch that came in the Grade 3 Tampa Bay Stakes in February. Admiralty Pier likes to lay close to the lead which will suit jockey Steve Bahen who is masterful with these types and having a banner season. He battled long and hard with Silent Poet in the Connaught Cup and went down fighting in the King Edward. Stablemate, Armistice Day put a first-up win on the board on the main track at the allowance level before his latest third on turf at 1-1/8M. The blinkers come off on Saturday but his form appears below what is needed.

Value Proposition is the Chad Brown representative whose involvement may sway opinion. So much hangs in the balance with this race and the lightly-raced 4-Y-O that has raced extensively in New York, broke his maiden on the turf at Belmont at 1-1//16M. His off-the-pace style looks effective as seen in back-to-back wins in allowance optional claimers before a game third in the Grade III Poker Stakes where the pace was modest. Value Proposition has not run in 11 weeks but has steady works and has shown ability to fire fresh.

War of Will: Connections decide to stay on turf for now as this resurgent colt just won that salty G1 Makers Mark Mile turning the tables on Chad Brown’s Raging Bull. This will be just his 3rd race since last Nov. so they haven’t gotten to the bottom of this one just yet and he is training brilliantly leading up to this. He’ll sit a perfect pressing trip just 2 lengths off the very modest pace set by #6 Admiralty Pier reserving plenty of energy in the process while holding off any late comers. Top player.

Value Proposition: This 4 yr-old, Chad Brown-trained colt will need to leverage that strong turn of foot to impact here as the pace set up and speed-friendly turf course do not work in his favor. However, he makes just his 3rd start in well over a year and form cycle analysis plus those eye-catching works combine to indicate that the NY-shipper is sitting on a big, big race. Had to be checked a few times in the stretch run in the G3 Poker.

Shirl's Speight: Connections wisely backed off any notion of running this lightly raced three-year-old colt in the Preakness opting to stay home and on the turf. He crushed an overmatched field in his debut and then followed that up with an even more impressive win in his first route trip. Has submitted a brilliant series of works leading up to this. Faces much tougher here but form cycle analysis is saying he has another big move forward in him. A logical contender offering value.

War of Will has looked well galloping in the morning, is in fine shape has been pointed to this race since his victory in the Makers Mark Mile. He needs to settle just off the front runners presumably Shirl's Speight and Admiralty Pier.