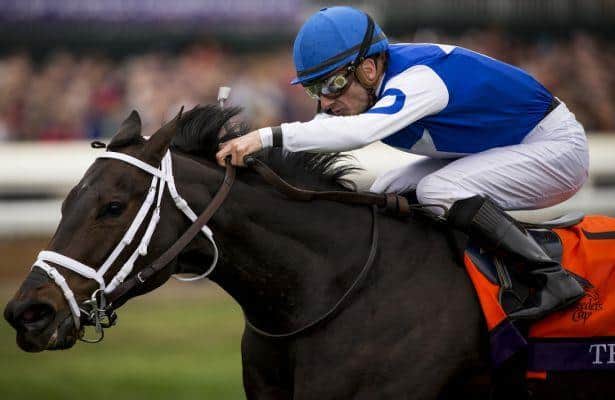 The $1 million, Grade 1 Ricoh Woodbine Mile runs this Saturday over Woodbine’s E.P. Taylor Turf Course. Making her first start back since a victorious trip to Royal Ascot in June is champion turf mare Tepin. The Mark Casse trainee seeks another win over the boys before heading to Santa Anita Park to defend her Breeders’ Cup Mile title. Race picks can be found at Woodbine Mile 2016: Odds and Analysis from Zipse at the Track.

Woodbine Mile post positions and odds are below as seen on the HRN Stakes Tracker.

Tepin rides a seven race win streak into the Woodbine Mile. After winning the Grade 1 Queen Anne Stakes, Tepin came back to the U.S. for some rest before training up to tomorrow’s race. While the “Queen of the Turf” is the favorite, it’s been three months since her last start. Should Tepin win, she will earn her sixth Grade 1 win for owner Robert E. Masterson and likely head into the Breeders’ Cup undefeated this year. Regular jockey Julien Leparoux will be aboard.

TEPIN getting some love from owner Robert Masterson ???? @WoodbineRacing pic.twitter.com/TELVKvOqAV

Mutakayyef enters the Woodbine Mile as the second choice and could give Tepin a run for her money. The Shadwell Stable horse has two wins from three starts in England this year, and shows a record of consistency. Though Mutakayyef only has three wins in 13 starts, he has been runner-up seven times and third three times, never finishing out of the top three. Trained by William Haggas and ridden by Dane O’Neill, Mutakayyef stands the best chance in beating Tepin.