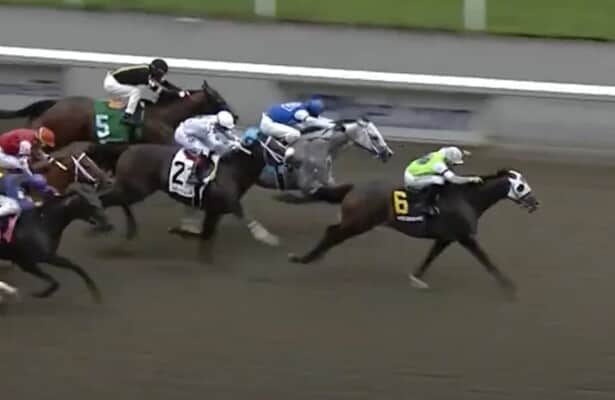 Lucky Score, under Leo Salles, was full of run late to take Sunday’s Grade 3 US$132,495 Vigil Stakes at Woodbine.

A 4-year-old gelding by Lookin At Lucky out of Miss Matzo, Lucky Score arrived at the six-furlong, dirt race for 3-year-olds and up without a stakes score on his stat sheet.

On a rainy afternoon at Woodbine, the Willie Armata trainee netted his milestone victory in impressive fashion. Rockcrest, breaking from the outside post, crossed over and engaged Warp Ride for the early lead, the duo taking their six rivals through an opening quarter in 22.77 seconds. Lucky Score and Salles were unhurried, sitting last of eight.

#6 Lucky Score kicks it in and wins The Vigil Stakes (GIII) at @WoodbineTB with @jockeyleosalles aboard!!

Another winner by Lookin At Lucky, who stands at @coolmorestud! pic.twitter.com/TtXowpCl6U

It was Rockcrest who then gained the upper hand, holding a half-length advantage over Clayton at the half-mile juncture reached at 44.96 seconds. Lucky Score, contesting his second career stakes race, moved up one spot to seventh but was left with a lot of work to do.

Rockcrest, at 15-1, dug in gamely, a length on top at the stretch call but was soon confronted by Lucky Score, now fourth, and closing fastest of all on the far outside.

At the wire, Lucky Score was a 1 1/4-length winner. Rockcrest was a neck ahead of multiple stakes winner Secret Reserve, who edged Clayton by a nose for third. The final time was 1:08.63.

A claim of foul by the rider of Secret Reserve on the winner was disallowed.

“This is the third time I ride him,” Salles said. “On the second time I finished second. I was pretty confident this time that we could grab the win. He was perfect. I’m just super happy.”

Owned by Domenic Liscio and Danny Iandoli, Lucky Score ran his record to 12: 5-2-3. He was fourth in his only other stakes engagement, the Bold Venture (G3) on Aug. 13.

“I’ve been involved in horse racing for maybe four or five years,” Liscio said. “The bottom line is I want to thank Leo, but if there’s one guy I want to thank the most, it’s (trainer) Ralph Biamonte. He picked this horse out, we had him with him, and he did a lot of work as a baby with him. No disrespect to Willie, but wherever Ralph left off, Willie has continued to do a fantastic job.”