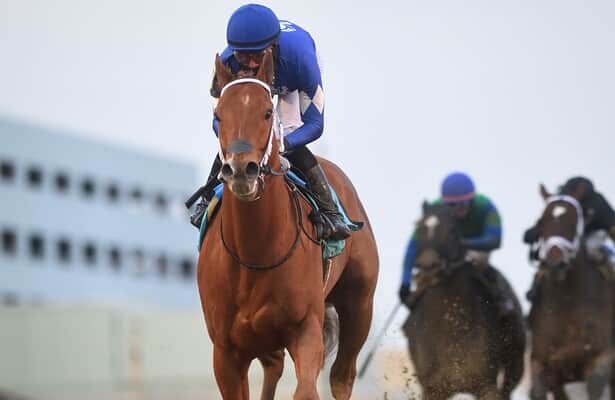 Morello will look to improve to 4-for-4 in Saturday's Grade 2, $750,000 Wood Memorial, Aqueduct's final Kentucky Derby qualifier of the season.

Entries were drawn Wednesday for the eight-horse field in the Wood, which offers 100-40-20-10 points to the top four finishers.

Morello's three wins all have come at Aqueduct, with the most recent a 3 1/2-length score in the Gotham (G3). That win gave him 50 Derby points, enough to get him to the starting gate May 7 at Churchill Downs for trainer Steve Asmussen. He drew post No. 5 and will be ridden by Jose Lezcano.

Early Voting is 2-for-2 for Chad Brown, also at Aqueduct, and beat Un Oho by 4 1/2 lengths in the Withers (G3). That win gave him 10 points on the Kentucky Derby leaderboard. He drew post No. 3 and will be ridden by Jose Ortiz.

Among other entries, Mo Donegal (12 points) was third in the Holy Bull (G3) in his only start since winning the Remsen (G2). He drew the inside post and will have Joel Rosario in the irons. Barese drew the outside post and will be ridden by Dylan Davis. He is 3-for-3 with wins in black-type stakes at Aqueduct his last two starts.

The Wood, the Blue Grass (G1) and the Santa Anita Derby (G1), all Saturday, are the final 100-point qualifiers for the Kentucky Derby. The Lexington (G3) at Keeneland on April 16 is the last qualifying prep, offering 20-8-4-2 points.

The weather forecast for Saturday in New York City calls for partly sunny day with a high of 56 degrees and a 30 percent chance of showers, according to the National Weather Service.