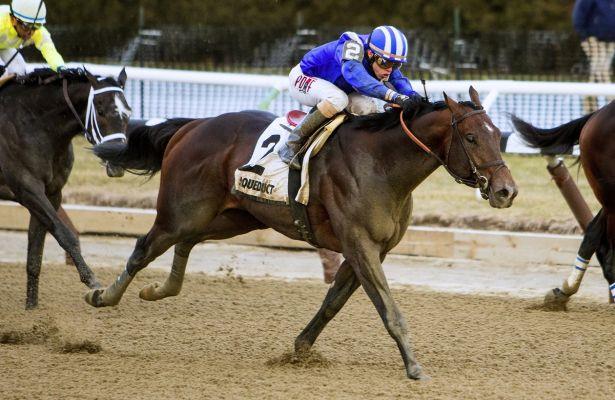 Photo: Sue Kawczynski/Eclipse Sportswire
No stranger to New York stakes success, West Coast-based trainer Peter Miller, who won the 2013 Grade 3 Tom Fool Handicap with Comma to the Top and last year's Grade 2 Kelso Handicap with Appealing Tale, is back in the Big Apple this weekend with another stakes contender.
Calculator will represent Miller and owner Richard Pell in Saturday's Grade 1, $400,000 Carter Handicap. The 4-year-old enters the Carter following a third-place finish in the Grade 2 San Carlos at Santa Anita on March 12.
Beaten less than two lengths in the San Carlos after a poor start from the rail, Calculator's race encouraged Miller to ship him to New York for the Carter.
"Everything about the race fit - it's a Grade 1, it's seven-eighths, and the purse is great," Miller said Friday by telephone from his Santa Anita home base.
"I thought he ran a great race [in the San Carlos]," he continued. "The start probably cost him the win. He's had a couple of bad starts with bad posts, so hopefully, we can get a better start. He got a good post for this race."
Calculator drew post 7 in the eight-horse field and will be ridden by Junior Alvarado.
*     *     *

Joining Calculator on the same Wednesday afternoon flight from Southern California to New York was Wood Memorial starter Trojan Nation, who is 30-1 in the morning-line.

Trained by Paddy Gallagher for owners Aaron Sones and Julie Gilbert, his breeders, the colt enters the $1 million, Grade 1 Wood Memorial a maiden after five starts.
"Sometimes you try these things, and sometimes they work, sometimes they don't," Gallagher said by telephone Friday. "But I am looking forward to running him a mile and an eighth."
A well-bred son by Street Cry out of Eclipse Award champion and Breeders' Cup winner Storm Song, Trojan Nation finished third in a maiden special weight race at one mile at Santa Anita four weeks ago. After trailing the field early, the colt closed and was beaten 3 3/4 lengths for the victory.
"Obviously, we were hoping he was not a maiden after his last race, but I was very happy with his last race," Gallagher said. "I thought it was an improvement."
The last time Gallagher ran a horse in New York was in 2014 when the 19-1 Flamboyant finished third in the Grade 1 Belmont Derby Invitational.
Trojan Nation is the 13th foal out of Storm Song, who won the 1996 Breeders' Cup Juvenile Fillies.
*     *     *

Larry Collmus has brought his eye-in-the-sky vantage point back to the Big A in time for Saturday's Grade 1 Wood Memorial, resuming his regular announcing duties at the New York Racing Association Thursday afternoon.

Collmus arrived earlier this week from Gulfstream Park, where he has served as the track's winter announcer since 2007.

"It was a fun winter in Florida," said Collmus. "I enjoyed the meet at Gulfstream but it's great to be back here."

Splitting his time between the NYRA circuit and Gulfstream, Collmus has arguably seen more than his fair share of leading Kentucky Derby contenders in the flesh this season, including Grade 3 Gotham winner and expected Wood favorite Shagaf, who won an optional claiming contest at the south Florida track by two lengths in January.

"I saw Shagaf down there and he looked great then, and so far so good up here too," he said. "But it seems to be a wide open Wood this year; I think there are a couple of horses that have a reasonable chance in here."

But it was Nyquist's powerhouse performance in the Grade 1 Florida Derby last weekend that has understandably stamped the largest impression on the veteran race caller.

"You had to be impressed with Nyquist in the Florida Derby," he said. "It looked to me that he was just playing around at the end. Mohaymen coming into the race looked fantastic and he couldn't keep up with him, so you've got to think Nyquist is the top of the division right now. And Gun Runner is good too, his Louisiana Derby was impressive.

"Of course, we've got four big ones to go," added Collmus, who has called the Triple Crown series for NBC Sports since 2011. "We'll find out a whole lot more after these last four preps and get a better picture going into the Derby, but, for now, Nyquist is the leader."

Trainer Larry Rivelli will find himself in an uncommon position Saturday afternoon when he saddles Cocked and Loaded for the Grade 3 Bay Shore in the Aqueduct paddock - two stalls down from Richie the Bull, a horse that was bred and trained by Rivelli before being sold over the winter.

Owned by Patricias Hope LLC and Richard Ravin, Cocked and Loaded will be making his 3-year-old debut in the seven-furlong Bay Shore, returning from a fifth-place finish in the Breeders' Cup Juvenile, where he finished fifth to reigning Kentucky Derby contender Nyquist.

Cocked and Loaded, the 6-1 third-choice on the morning line on Saturday, joined Rivelli's string last spring. The son of Colonel John won his stakes unveiling by a half-length in the Tremont in June at Belmont Park and eventually closed out his 2-year-old campaign in the Juvenile having posted three wins from six starts over five different racetracks.

"He had a pretty busy year last year so we gave him plenty of time off," said Rivelli. "Coming off the bench, we figured this would be a good spot to come back. He's training great, I'd say better than last year even. It's a tough field but he couldn't be doing any better."

Winner of his two-turn debut in the Grade 3 Iroquois by two lengths last fall, Cocked and Loaded will likely stretch out again down the road, Rivelli said, and could possibly even make an appearance on the Kentucky Derby undercard on May 7 at Churchill Downs.

Richie the Bull, meanwhile, will be making his second start for his new connections following a third-place finish in the Grade 2 Swale in January at Gulfstream. Now owned by Richies Usual Suspects and trained by Joan Scott, Richie the Bull was purchased privately after a 9 ¼-length victory in the Jim Edgar Illinois Futurity last December at Hawthorne Racecourse.

Richie the Bull is a half-brother to stakes winner Dom the Bomb, who also won the Jim Edgar after romping in the Sun Power as a 2-year-old in 2015. Out of Richiesgirlgotgame, the Benny the Bull colt was bred in Illinois by Rivelli and Ravin, co-owner of Cocked and Loaded.

"He's a pretty nice horse," Rivelli said of his former charge. "I still own the mare. She had two foals and both have turned out to be stakes winners. We just lucked out with that mare, it wasn't anything we could've predicted.

"It was a fair price for everybody involved so we decided to sell him, it wasn't like there was anything we didn't like about the horse," he continued, adding: "but I'm not sure if I'll happy or sad if he beats me."

Trainer Jimmy Jerkens is plotting a racing schedule for newly crowned New York-bred Horse of the Year, Effinex, who worked five furlongs in 1:02.52 at Belmont Park on Thursday.

The first stop is the Grade 2 Oaklawn Park Handicap April 16 in Arkansas. After that, the 5-year-old son of Mineshaft will target New York's premier races for older males, including the Grade 2 Brooklyn Invitational June 11, and the Grade 2 Suburban Handicap, a race the horse won last year, on July 9.
Effinex most recently finished third as the favorite in the Grade 1 Santa Anita Handicap on March 12. The horse ran that day with a case of the hives, which Jerkens said still puzzles him.
"Still don't know what is causing it," Jerkens said following Effinex's work. "The [hives] are still popping up, every so often, but not to the degree it was [in California].
"I don't know [if it had an effect on his performance]," the trainer added. "People say [hives] come from stress. It's hard for me to believe that because he has been in a lot of stressful [situations] before that. I don't know if I buy that one."
Effinex, who races for 84-year-old Bernice Cohen's Tri-Bone Stables, and was bred by the owner's son, Dr. Russell Cohen, is scheduled to fly to Arkansas on April 11.
*     *     *
Rescheduled from last Sunday when a wind storm forced the cancellation of racing at Aqueduct Racetrack, the Grade 3, $200,000 Top Flight Invitational Handicap will be run on Sunday.
Five older females, four of whom stakes winners, are entered in the 1 1/8-mile dirt race. The field is comprised of four of the original entrants, plus one addition, New York-bred Saythreehailmary's.
The Shug McGaughey-trained Carrumba, a homebred for Phipps Stable, whose patriarch Ogden Mills "Dinny" Phipps died at the age of 75 Wednesday, is the 6-5 morning-line favorite.
The Phipps family has won the Top Flight on three occasions; most recently with Daydreaming in 2004.
Carrumba, who breaks from post 5 with Jose Ortiz aboard, is making her first start since finishing second in the Grade 3 Comely at Aqueduct last November. The Comely represented her stakes debut.
America and Mei Ling are co-highweights at 118 pounds.
Mei Ling, the 2-1 morning-line second choice, enters the Top Flight following a dominating performance in the Heavenly Prize Stakes at Aqueduct March 5. Todd Pletcher trains the mare for Barry K. Schwartz.
Pletcher also entered America, a homebred for celebrity chef Bobby Flay. America is unraced since finishing fifth in Aqueduct's Grade 3 Go For Wand Handicap last November.
Noble and a Beauty and Saythreehailmary's are both seeking to earn their initial graded stakes victory in the 76th running of the Top Flight.
*     *     *

Multiple graded stakes winner Takeover Target will go to post on Sunday as the expected favorite in the one-mile, $100,000 Danger's Hour at Aqueduct Racetrack, NYRA's first turf stakes of 2016.

Installed at 7-5 on the morning line, Klaravich Stables and William Lawrence's 4-year-old son of Harlan's Holiday closed out his sophomore campaign in October with a victory in the Grade 3 Hill Prince. The Chad Brown trainee has returned this year with a pair of off-the-board finishes, checking in fifth in the Grade 2 Fort Lauderdale at Gulfstream Park, before finishing fourth in the Gulfstream Park Turf Handicap on February 6.

Takeover Target will be ridden by his regular jockey, Irad Ortiz, Jr. from the outside post.

Drawing the rail, Legendary will be looking to get back on track after a seventh-place finish in the Gulfstream Turf for trainer Niall Saville. The 7-year-old gelding, 7-2 on the morning line, will be ridden by Cornelio Velasquez.

Also on tap for the Danger's Hour are Lubash, recently crowned New York-bred turf male by the New York Thoroughbred Breeders for the second year in a row, will make his 9-year-old debut for Aliyu Ben J Stables and trainer Christophe Clement; Fredericksburg for Ramona S Bass LLC and trainer Michael Matz; Trinity Farm homebred Macagone for the barn of Michelle Nihei; Bill Mott-trainedMosler for Adele Dilschneider; and recent claimer winner Late Night Lu for Joe Sharp. Send It In is entered for the main track only.