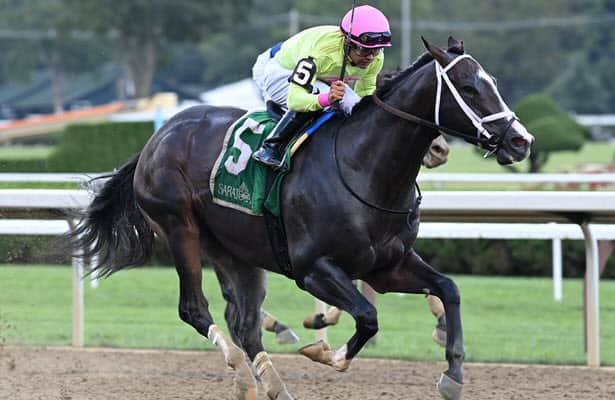 Patience and perseverance paid off handsomely for owners Michael Dubb, The Elkstone Group, Madaket Stables and Michael Caruso and trainer Brittany Russell when Wondrwherecraigis became a stakes winner for the first time in Friday’s Tale of the Cat at Saratoga.

Based at Pimlico Race Course, the 4-year-old gelding’s front-running 2 3/4-length triumph under jockey Luis Saez has the connections thinking of taking the next step in their own backyard in the $200,000 Frank J. De Francis Memorial Dash (G3) Saturday, Sept. 18 at Laurel Park.

Named for the late president and chairman of both Laurel and Pimlico, the De Francis’ illustrious roster of winners includes Hall of Famer Housebuster, fellow sprint champions Cherokee Run, Smoke Glacken, Thor’s Echo and Benny the Bull, and Lite the Fuse, the race’s only two-time winner (1995-96) honored with his own stakes race in Maryland.

“It’s not out of the question. It seems like the timing is good, but we’ll have to just see how things fall into place,” Russell said. “We have to see who nominates and what it looks like, but I think he could be very useful around here. If it means the Grade 3, great. If not, we’ll look around.

“I like the idea. I like the distance, the timing, all those things,” she added. “But, we also want to be reasonable. It would be exciting for me.”

Married to jockey Sheldon Russell and 10 weeks away from delivering the couple’s second child, Russell stayed behind in Maryland to watch Friday’s race, leaving the saddling to assistant trainer Amanda Knox. Saturday morning’s report was encouraging.

“Amanda said he’s fantastic, sound, ate up,” Russell said. “He was bouncing around, happy as could be.”

Since mid-April, Wondrwherecraigis has been part of Russell’s string at Pimlico, where he prepped for the Tale of the Cat with a commanding 5 ¾-length optional claiming allowance triumph July 18. Of his five career wins, two have come at both Pimlico and Laurel.

By multiple graded-stakes winning sprinter Munnings, Wondrwherecraigis cruised by three lengths in gate-to-wire fashion on the Black-Eyed Susan (G2) undercard May 14 at Pimlico, his first race in nearly nine months since finishing fourth in the Amsterdam (G2) last August at Saratoga.

Wondrwherecraigis was unraced at 2 after selling for $67,000 as a yearling, debuting with back-to-back wins at Laurel March 13 and June 6, 2020. Two weeks later, he was entered in the Keeneland Horse Association’s horses of racing age sale but failed to meet his $210,000 reserve.

Sent to New York, Wondrwherecraigis ran third in the Gold Fever at Belmont Park before taking on graded competition in the Amsterdam, finishing 7 ½ lengths behind Yaupon – who would come back to win the Chick Lang (G3) last October and Lite the Fuse July 4 at Pimlico – before going to the sidelines.

“The partners have been patient. It’s a perfect example of if you know the horse has ability, just do the right thing by them,” Russell said. “Hopefully it works out the way it seems to have with this horse.”

Wondrwherecraigis was nominated to the $100,000 Chesapeake Aug. 23 at Colonial Downs, also six furlongs for 3-year-olds and up, but how well he had done since the Pimlico race and the prospect of a smaller field landed him in Saratoga instead. It was Russell’s fourth career win at Saratoga and first in a stakes.

“I sort of wrote this race off originally. We actually supplemented him. I didn’t even nominate him because I didn’t want to feel pressured,” Russell said. “He ran such a big number when he won the last time at Pimlico. I was really thinking that Colonial race was good timing and that track seems to be good for speed horses. There seemed like a lot of positives to go to Colonial.

“But then looking at it, it seemed as though it wasn’t going to be a large field [at Saratoga]. I wasn’t sure about quality at the time,” she added. “It worked out. It doesn’t always work out that well, but it did this time.”

Wondrwherecraigis will return to Maryland next week and begin preparations for his next race. All stakes races at Saratoga and Maryland’s graded races such as the De Francis are run Lasix-free.

“I’m going to leave him up there a couple days and just kind of let him recover. I didn’t want to put him right on a truck and ship him six hours after that run,” Russell said. “We’ll get him back home and see how he is. I think the main thing is, we learned that he doesn’t need Lasix and that’s a big deal when you’re talking about running in the better races like that.”