Wonder Wheel fends off pursuers to win Alcibiades, BC bid 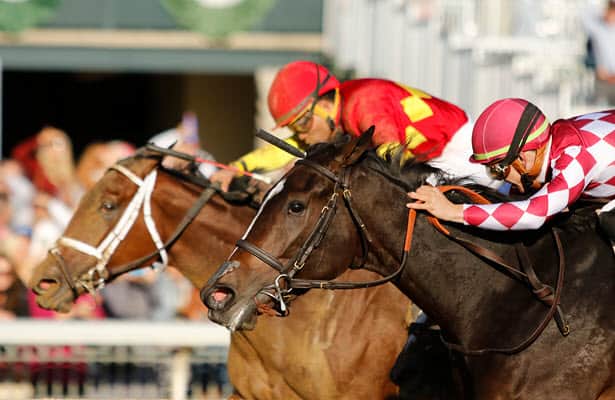 It was not an out-and-out speed bias. But it sure did not hurt to be a pacesetter on the main track Friday at Keeneland. That was evident when post-time favorite Wonder Wheel (4-1) earned a spot in the Breeders’ Cup Juvenile Fillies by winning the Alcibiades Stakes for 2-year-old fillies.

“We watched the speed today,” trainer Mark Casse said. “Tyler and I talked about it.”

“My filly had shown good speed before,” Gaffalione said. “We wanted to be a little aggressive. She broke very alertly and put herself in a great position. When we made the lead, her ears went forward, so I knew that she was very comfortable.”

Get suggested wagers for the preps with Breeders' Cup Super Screener

Having ridden Wonder Wheel in all four of her races, Gaffalione knew about the comfort zone first hand. She held the lead at the stretch call in her first two races at Churchill Downs, including a come-from-behind debut victory going 5 1/2 furlongs June 3 and then leading most of the way July 4 in winning by 6 3/4 lengths in the Debutante Stakes.

It did not work out that way her last time out at Saratoga. As the 7-5 favorite Sept. 4 in the seven-furlong Spinaway (G1), Wonder Wheel stalked the pace but never held the lead on her way to a second-place finish to 14-1 long shot Leave No Trace.

“I didn’t have her totally cranked up for it,” Casse said. “She got hung wide, and she ran good.”

This time, instead of being the hunter in her first time going two turns, Wonder Wheel set honest but less than blazing early fractions of 23.49, 47.16 and 1:11.60. After a slow break, Chop Chop was as far back as 11th in the 14-horse field. Joel Rosario started making up serious ground with her in the second turn.

Racing down the middle of the track in the short homestretch, Chop Chop picked off everyone in front of her by the sixteenth pole. Everyone but Wonder Wheel.

“She came running,” Rosario said, “and it looked like for a second, we got it.”

“At the sixteenth pole, I was thinking we might go by,” Chop Chop’s trainer Brad Cox said. “She just never went by.”

“Coming into the stretch I had plenty of horse,” said Gaffalione, a first-time Alcibiades winner. “She just kind of got lost up there by herself, but I thought it was a great performance, and hopefully she moves forward off of that.”

“I don’t know if she got tired,” Casse said. “(Gaffalione) said she lost focus. Obviously they were coming at her pretty hard.”

Raging Sea (6-1) also was a threat. She crossed third, another neck behind Chop Chop, and Xigera (8-1) finished 3 1/4 more lengths back in fourth. Stewards, however, flip-flopped that order after a successful claim of interference by both Xigera’s trainer Phil Bauer and jockey Joe Talamo.

The win was Casse’s fourth in the last 11 runnings of the Alcibiades, which also awarded 10-4-3-2-1 points to the top five finishers in the early qualifying standings for the 2023 Kentucky Oaks.

Casse said this particular race was a target for Wonder Wheel on the way to an even bigger target over the same course and distance Nov. 4.

“After she won at Churchill, I felt like she had done a lot in a small period of time,” he said. “I kind of had to make a decision. Do I bring her back and run her twice at Saratoga? Or do I give her a little break, have her pretty cranked up for the Spinaway, which would then bring her into this, the Alcibiades. I decided, you know what? I wanted to win the Spinaway, but it wasn’t my biggest goal. Obviously, the biggest goal is a month from now (in the Breeders’ Cup). This would be the second biggest one.”

They did not, yet Casse was keenly aware of how close it wound up being.