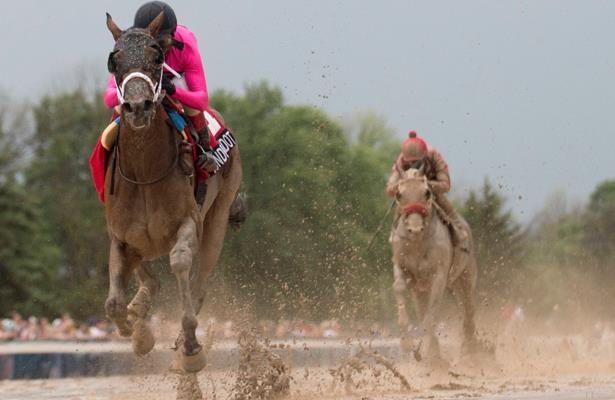 Wonder Gadot showed her class on both sides of the Canadian-American border, earning more than $1.5 million in her career.

The 4-year-old filly will now enjoy life on the farm.

Casse first announced the news on “At the Races with Steve Byk.”

“She had proved so much already. There wasn’t a whole lot left that was out there for her,” Casse told Horse Racing Nation. “We just talked about it and decided that would be enough. She actually retired sound. She was fine. …

“I’m extremely proud of her. She danced a lot of dances and ran hard many, many times.”

The Medaglia d’Oro-sired Wonder Gadot, who collected $1,524,861 in her career, was bred in Ontario and in April was named Canada's Horse of the Year for 2018.

As a 3-year-old, Wonder Gadot got her shot at the 2018 Kentucky Oaks and dueled with Monomoy Girl down the stretch at Churchill Downs. She came up just short the first Friday of May, finishing second by a half-length.

Back north of the border, the Casse trainee took on the boys in the first two legs of the 2018 Canadian Triple Crown series.

Rather than try to complete the Canadian Triple Crown, Wonder Gadot returned to the U.S. for Saratoga’s Travers Stakes (G1), where she finished 10th.

Wonder Gadot ran twice this year as a 4-year-old, both at Oaklawn Park. She came up second March 8 in an allowance optional claiming race, then sixth April 14 in the Apple Blossom Handicap (G1).

Wonder Gadot went back to Toronto, where she worked under Casse’s assistant, David Adams.

“He knows her as good if not better than anybody,” Casse said of Adams. “We just kind of felt like there wasn’t a whole lot left for her to do unless she was at the top of her game. We just felt like maybe she wasn’t there.

“She was sound. The crazy thing about her is that in all her racing and everything she did, she never had a day that she was off. … She just was always 100 percent sound, which is amazing, really. She never had a bad day soundness-wise.”