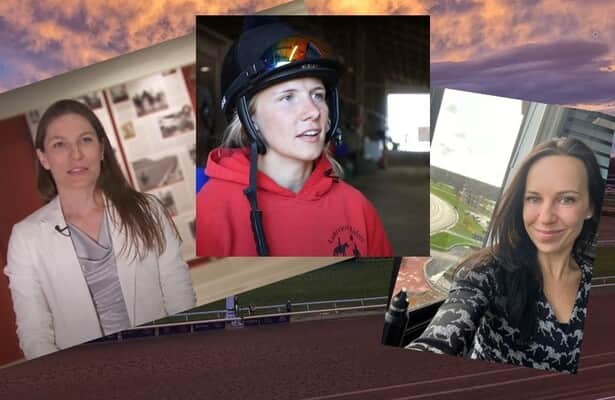 At best the statistics are a curiosity. In the main they are frustrating. At worst they are maddening.

Of the 125 winningest jockeys in North America this year, only one is a woman. Of the top 136 riders in purse earnings, there are only two women.

Of the dozens and dozens of people known to have announced races at tracks across North America in the past century, there have been only three women.

“I wouldn’t say that it bothers me,” jockey Emma-Jayne Wilson said when asked whether it did. “I would like to see more women get opportunities and successes and show that the parity is there.”

Racing mostly at Woodbine in her native Canada, Wilson has been one of the exceptions to the male-dominated rule among jockeys. Through Saturday she ranked 74th in 2022 earnings with $3,661,197, according to Equibase.

Kylee Jordan, 20, who recently lost her apprentice bug and the weight allowance that went with it, has 134 wins this year, putting her 44th in North America. The next nearest woman, Jacky Davis, ranked 123rd with 81.

At least Wilson and Jordan are not completely alone in being able to compare experiences with other women who are professional jockeys. That is not the case for Jessica Paquette.

Having spent more than half her life as a horse-racing professional, Paquette, 37, is getting her feet wet as the voice of Parx Racing. She was the first woman in more than six years to be named the full-time announcer at a U.S. racetrack. As far as anyone has been able to find, she, Angela Hermann at Golden Gate Fields in 2016 and the late Ann Elliott at New Orleans-area tracks New Orleans in the early ’60s are the only women who have been full-time announcers here.

Paquette, who made her Parx debut last week, said she hoped to be part of a trend for the sport’s future rather than an exception to racing’s past.

“The tide is changing,” Paquette said. “I think in sports, in general, people are getting more accustomed to a woman’s voice in play-by-play. We’re just continuing to move forward. I think you can get frustrated looking back that how it has taken this long to get here. We’re here now, so let’s go forward.”

A spotty trend for growth

For jockeys, advancement has ebbed and flowed. Since Diane Crump needed a police escort at Hialeah to break the gender barrier in 1969, the list of prominent female jockeys has grown to include the likes of Hall of Famer Julie Krone, Donna Barton Brothers, Rosie Napravnik and Chantal Sutherland.

Wilson, 41, has ridden more winners than any Canadian woman in the history of Thoroughbred racing. She said she looks past that fact.

“Instead of identifying female riders as female riders and identifying them by their gender, we need to move toward recognizing the skills and the talent regardless of the gender,” she said. “I think it’s a detriment to focus on those genders. Whether you are a young, aspiring rider – a woman or a man – or a trainer looking at up-and-coming riders or even established riders, it shouldn’t be about the riders’ gender, frankly.”

The fact Wilson has maintained a steady level of success since her breakthrough debut 17 years ago is a testament to the idea that yesterday’s glory means nothing when it comes to winning tomorrow’s races.

“You have some young apprentices who won Eclipse Awards, male and female, that haven’t been able to maintain that success, either,” she said. “In this game, in horse racing, it’s about what have you done for me lately, so to speak. You have to show and prove that you’re capable.”

Nearly a generation removed from Wilson’s success in Canada, Jordan carved a similar path by making her mark early in her own back yard. In this case it was Iowa, where Jordan won the 2022 riding title at Prairie Meadows only 17 months after making her professional debut.

Preparing to start her second winter at Oaklawn, Jordan looked back on her summer and said she could not have seen it coming.

“Absolutely not,” she said. “Before this year I kind of set a goal for myself. I wanted to be at least top five.”

By 81-76, she outdueled Alex Birzer, who was looking for a three-peat at Prairie Meadows. To maintain her success after losing her bug, Jordan did not have to look far. She already had proven herself to faces made familiar to her in a lifetime being around the stable of her father, trainer Todd Jordan.

“Obviously, I was lucky,” Jordan said. “In Iowa, I had a lot of good connections and a lot of people who were willing to help me out and give me opportunities and stuff. I haven’t had a whole lot of trouble (since losing the apprentice weight allowance). We’ll see how it takes at Oaklawn, just because it’s a little bit of a tougher track.”

Call it a case not of what you know but who you know, a concept that is not exactly gender specific. Backside relationships mean everything for jockeys trying to get afternoon rides.

Jordan clearly had no illusions that she could snap her fingers and translate her Prairie Meadows success to Oaklawn, where she had eight wins and 20 other in-the-money finishes from 116 starts in 2021-22. She became a familiar face at the Arkansas track last winter, but she was asked to exercise horses more than race them.

To that end Jordan will enjoy the presence of two more of her Iowa allies in the coming months. Agent Brian Assman will have her book at Oaklawn, and trainer Tim Martin may look to parlay the streak of success Jordan had riding 2-year-old gelding Tyler’s Tribe to five wins in as many starts.

“Even when I was first starting, and I was a green rider, (Martin) has always been super loyal to me and always gave me an opportunity,” said Jordan, who was praised widely for easing Tyler’s Tribe when he bled this month in the Breeders’ Cup Juvenile Turf Sprint. “Even before the race he just wasn’t really acting like himself. As soon as we hit the quarter pole, I knew something was wrong. I kind of just eased him up and took care of him.”

Jordan’s older sister Taelyn also rides horses and has ponied Kylee for her races at Prairie Meadows. Beyond the family circle that also includes her mother Christa, the slowly widening footprint of female jockeys has encouraged Kylee.

“The fact that there are as many girl riders as there are right now, there are changes being made,” Jordan said. “We just try to compete with the boys as much as we can and make it work for our careers, but we’re just out there with the males trying to do the same thing.”

Have microphone, will make mark

When asked to assess how her first week went behind the microphone at Parx, Paquette was constructive with her self-criticism. And tough.

It was not as if any kinks could be worked out quietly in a dress rehearsal. On a not-so-busy weekday across the country, Parx undoubtedly had a large share of horseplayers watching Tuesday, when Paquette made her highly anticipated debut.

“It is kind of a surreal thing having your first couple of days of any job be so public, right?” Paquette said. “You make some beginner errors and try to find your footing and get comfortable in a new place with new people and the whole thing. I’m incredibly grateful for the opportunity, and I’ve been really lucky to get such great constructive feedback from so many people I respect.”

Filling in here and there at places ranging from her old home track Suffolk Downs in 2014 to last year at Sam Houston Race Park, Paquette figured she had called about 50 races before jumping into the deep end of the announcing pool last week.

“Because I’m new to Parx, I need to get to know the horses and jockeys a little bit,” she said. “The only way to do that is by watching them and seeing them in person and seeing just the day go by. I think after a couple of weeks I’ll really start to recognize everyone’s silks in a way that’s beyond basic memorization that will really help in my calling.”

It already has been a triumphant year for Paquette. She overcame a broken back 13 months ago when her horse threw her after a truck backfired nearby. Ordered by doctors to stay off her feet for four months, Paquette defied them and flew to the Global Symposium on Racing in Arizona last December. The accident left her a half-inch shorter, but this month she successfully ran and completed her first marathon, and she literally has gotten back on the horse to resume riding.

After all that, the challenge of calling horse races full time might seem like a walk in the paddock. But now Paquette is breaking one of the countless glass ceilings that women have endured for generations. As unjust a characterization as that might seem for one person tasked with one job, she did not flinch from the challenge.

“My skin’s thick. I’m happy to carry it,” Paquette said. “If anything, the pressure is self-imposed. I do want to be a good role model for a younger generation in the sport if I have the opportunity to do so. I want to represent women well in the sport, because we are still playing catch-up in a lot of ways.”

The reality of a higher standard

Trailblazing women have discovered for decades that they often have to be better than their male peers doing what unfairly had been considered a man’s job.

Conventional wisdom would suggest it does not need to be that way in the 21st century. Reality, however, still may differ. Do women still have less room for error when it comes to getting riding or announcing assignments for horse races?

“Possibly,” Wilson said. “Horse racing has an opportunity to support and endorse the shift toward gender parity. Male and female jockeys, we compete on the same racetrack.”

Jordan, whose entire life has been lived in the 21st century, was more blunt.

“I feel like girl riders are critiqued a lot more than male riders,” she said. “But you’ve just got to do your best and keep trying.”

If that is not good enough, there are women – and men – who have the backs of those who just want an equal chance to succeed.

“I’ve always had a strong streak of righteousness and feminism in me,” Paquette said. “This all works for me.”