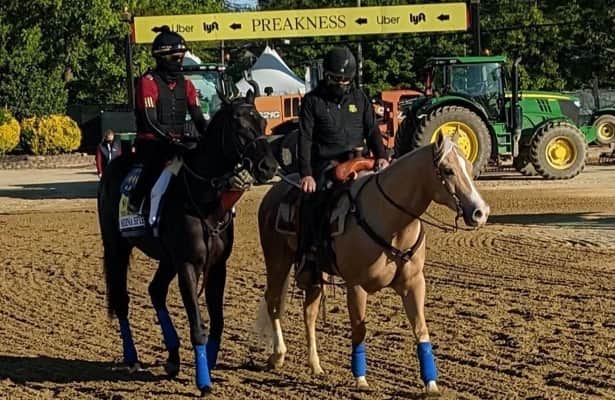 On a typical day full of morning gallops and hot walks and horse baths at Pimlico, it was also a continuing case of hurry up and wait.

Not so much for the Preakness Stakes. Saturday cannot come soon enough. It is more about the results of pre-race drug tests due back Friday for horses handled by trainer-in-absentia Bob Baffert, including the shaky Kentucky Derby winner Medina Spirit.

Powerless to do anything about the tests, assistant trainer Jimmy Barnes soldiers on – without his controversial boss.

“I’m used to it,” Barnes told a gaggle of reporters after Medina Spirit, Concert Tour and Friday’s Black-Eyed Susan (G2) favorite Beautiful Gift had their morning gallops. “I travel all the time as well. I’m always on the road, and if Bob is there sometimes, great. If Bob can’t make it, then I have to just pick up the slack, just march on, try to do my best and try to produce a win.”

It is more complicated this time. A lot more complicated. Usually the biggest question for the Baffert team is whether a horse will be ready after only two weeks between big races. Since Baffert’s Kentucky Derby winners are 5-for-5 coming back from the normal short break for the Preakness, the question applies to Medina Spirit.

“He couldn’t be better,” Barnes said. “He came out of the Derby in fine shape. He wasn’t a tired horse. He rebounded quickly and shipped up here and handles the track very well. The weather is good, so I think everyone is going to have a fair chance at this with it only being a 10-horse field. I’m excited.”

Barnes will talk a blue streak about the horses. But when the subject switches to the news he got last Saturday that Medina Spirit tested positive for an excess of the legal anti-inflammatory betamethasone, he clams up.

“I’m just going to keep this interview to the horses,” Barnes told a TV crew that arrived Thursday. The day before he gave a terse “no comment” to a couple of questions along those same lines.

Medina Spirit’s Derby victory hangs by the thread of a second blood sample. If it also comes back positive for betamethasone, he will be disqualified. His Preakness run also depends on his passing the drug test that he was administered when he arrived at Pimlico early this week. That is the white smoke for which it seems everyone is waiting.

Presuming he passes – and that Concert Tour does, too – there is the lingering question about which one controls the pace of the race. John Velázquez led the whole way in the Derby with Medina Spirit, who was drawn into post 3 on Saturday. Mike Smith takes the ride for the first time on Concert Tour, who was drawn wide into post 10.

“He’s on the outside, so he should be in a clean spot,” Barnes said. “I can’t see anyone getting in front of him from the outside.”

Having a stablemate as a big threat to the Derby winner provides a sense of déja vù. Baffert and company experienced it in 2015 when Dortmund unsuccessfully challenged American Pharoah. Asked how that might impact Saturday’s race, Barnes started to sound reticent again.

“I try not to worry about that,” he said. “That’s something Bob needs to worry about and talk to the owners about. I just have to take care of the horses and make sure they get to the paddock in good shape and get saddled up. Then it’s up to the jockeys.”

One question Barnes will openly answer is about what went wrong last month at the Arkansas Derby (G1), where Concert Tour and his former jockey Joel Rosario finished a puzzling third as odds-on favorites. It is the only blemish on what had been an undefeated record.

“We broke on top. We should have just went,” Barnes said. “We didn’t want to get caught I guess in some kind of speed duel (with Caddo River). A lot of times when the gates open you’ve got to throw instructions out the window and play the break. That’s probably the only thing I was disappointed in. That’s the way it goes. You can’t win every race.”

As the conversation veered back to identify which horse is the one to beat, Barnes was diplomatically laconic.

“Sure, we want a Triple Crown every time,” he said. “But if Concert Tour didn’t get his chance in the Derby, this is his chance to shine.”

Like most of the rest of the Preakness horses, Medina Spirit and Concert Tour had routine morning gallops under a cloudless sky with the temperature in the low 50s.

Among Preakness horses, the Japanese shipper France Go de Ina was the exception to the rule. Instead of track work, he had a one-hour hand walk around the isolation barn.

With ideal weather forecast through Friday night, the National Weather Service has introduced a 20 percent chance of showers and thunderstorms after 2 p.m. EDT Saturday with post time for the Preakness set for 6:47 p.m.