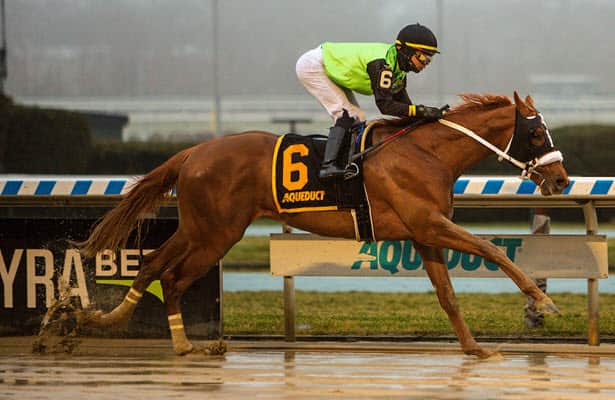 The Road to the Kentucky Derby will go through New York when a field of 11 sophomores assemble for Saturday’s 148th running of the Grade 3, $250,000 Withers at Aqueduct Racetrack.

The nine-furlong Withers is a qualifying event for the Grade 1, $3 million Kentucky Derby on May 7 at Churchill Downs, offering 10-4-2-1 points to the top-four finishers in the two-turn test.

Courvoisier will look to build on a 10-point triumph last out in the Jerome on New Year’s Day at Aqueduct. The regally-bred son of Tapit, out of 2014 Champion 2-Year-Old Filly Take Charge Brandi, secured outside stalking position in the one-turn mile Jerome and matched strides with pacesetter Hagler around the far turn before pulling away to a 1 1/4-length triumph over the sloppy and sealed main track.

Courvoisier, currently 12th on the Kentucky Derby leaderboard, boasts winning experience at the Withers distance having graduated at 14-1 odds on December 2 in his first start at the Big A.

Trainer Kelly Breen said the sizable Courvoisier, who is owned by Hill ‘n’ Dale Equine Holdings and James Spry, will appreciate a return to two turns.

“He's always been a big boy. He was a big boy at birth and he's filling in,” Breen said. “He's a nice horse and I think that the longer the better for him. We have high hopes for him - let him show it on the track.

Courvoisier will attempt to add his name to a list of a dozen horses that have captured both the Jerome and the Withers, including Hall of Famers Housebuster [1990], Hill Prince [1950] and Duke of Magenta [1878].

Ruben Silvera will pilot Courvoisier for the first time, breaking from post 5.

Trained by Alfredo Velazquez, the consistent Smarten Up was twice placed at maiden level before a nine-length romp on November 22 at Parx Racing. The son of American Freedom made his first venture away from Parx in the Jerome, launching a late turn-of-foot to finish second at 21-1 odds.

Smarten Up will be ridden by returning pilot Anthony Salgado from post 3.

Cheyenne Stable’s Cooke Creek, a son of Uncle Mo trained by Jeremiah O’Dwyer, was in pursuit from the four path in upper stretch in the Jerome, but was passed up by Smarten Up’s late kick, finishing two lengths behind Courvoisier.

Cooke Creek graduated at first asking in September sprinting 5 1/2-furlongs at Delaware Park. He is the only horse in the field with a stakes win at two turns, having captured the one-mile Rocky Run on October 16 at Delaware Park, three weeks before finishing second in the Grade 3 Nashua traveling a one-turn mile at Belmont Park.

“I was very proud of his run last time in the Jerome on a track I didn’t think he’d like,” O’Dwyer said. “Pedigree-wise and the way he’s built with his style of running, two turns is exactly what he wants. He won going five and a half the first time, but I think that was just his class showing through. When he ran in the Jerome, it was either that or going a one-turn mile at Laurel.

“He’s just progressed from race to race and is getting bigger and stronger,” O’Dwyer added. “The owners are good people and have given me some nice horses. It’s nice to see him do something nice for them on the track.”

Cooke Creek will break from post 11 under Manny Franco, a two-time Withers winner.

Ryerson said he is looking forward to getting the dark bay Upstart colt back to two turns.

“We’ve always wanted to try him longer. When I ran him a mile and an eighth, he actually looked like he was going to do well and he got to lugging in that day,” Ryerson said. “He straightened that out and his last two have been good. He’s definitely [going] in the right direction. He’s a nice, big horse. He’s attractive and has ability and we’re excited about giving him a chance here. We’ll see what happens.”

Jorge Vargas, Jr. will have the call from post 6.

R. L. Johnson's Mr Jefferson will make his third straight appearance at the Big A for trainer Michael Trombetta. The Maryland-bred Constitution chestnut finished a distant fourth in the nine-furlong Grade 2 Remsen on December 4 ahead of his sixth-place finish in the Jerome.

Among the fresh faces is Klaravich Stables’ Early Voting, who will see added ground following a triumphant career debut going a one-turn mile on December 18 at Aqueduct. Early Voting was forwardly placed from the outside down the backstretch and opened up in the stretch before fending off a late rally by Matt Doyle to win by 1 1/2 lengths as the heavy favorite.

“He had some quality going into the maiden,” said Brown’s Belmont-based assistant Dan Stupp. “Win or lose, we thought the maiden race would move him up both physically and mentally, which I think it did. We saw glimpses of talent from him in the mornings. Fitness wise, he could have used a race to move him forward.”

A son of 2021 leading freshman sire Gun Runner, Early Voting will attempt to give trainer Chad Brown his second straight Withers win, a feat that has not been accomplished since the late Hall of Famer Allen Jerkens saddled Spite the Devil [2003] and Medallist [2004]. Brown captured last year’s Withers with Risk Taking, who also is owned by Klaravich Stables.

“It really seems like he’s progressed well off his first race. His works have been excellent and I’m excited to see him run back,” Stupp said. “He’s bred to run all day and we thought the longer the better since we’ve had him. He’s coming off just a maiden win so it’s a big ask first time against winners off one race, but he’s given us every indication that he’ll show up with a good effort.”

Purchased for $200,000 at the 2020 Keeneland September Yearling Sale, Early Voting is out of the unraced Tiznow mare Amour d’Ete – a half-sister to 2004 Champion Sprinter and influential stallion Speightstown.

Constitutionlawyer will make his stakes debut following a nine-furlong maiden win on January 2 at Aqueduct. The Ray Handal-trained Constitution colt displayed frontrunning tactics for the first time in his maiden victory, which took place over a muddy and sealed track. Constitutionlawyer built on his advantage through every point of call to win by 3 1/2 lengths and registered a field-best 85 Beyer Speed Figure.

Hall of Famer Bill Mott will send out Grandview Equine and Don Alberto Stable’s Gilded Age, who returns off a three-month respite following a two-turn maiden score on November 19 at Churchill Downs. Prior to distant efforts behind subsequent graded stakes winners Major General and Rattle N Roll, Gilded Age made a last-to-first move to graduate at fourth asking by 2 3/4 lengths.

Gilded Age, who attempts to give his influential sire Medaglia d’Oro a second straight Withers winner, will break from post 4 under Kendrick Carmouche.

The Withers honors David Dunham Withers, one of the most successful breeders of the 19th century. Withers was one of the founders of Monmouth Park in New Jersey, and was also a member of both the New York Jockey Club and the Coney Island Jockey Club. Throughout its rich history, the Withers has been won by 29 horses that have also won an American classic, including Triple Crown winners Sir Barton [1919] and Count Fleet [1943].

*Rating is based on HRN fan votes, which rank the Top Active Horses in training.
Courvoisier Withers Withers (2022)