With 'pressure off' after first win, Riley Mott settles in at Oaklawn 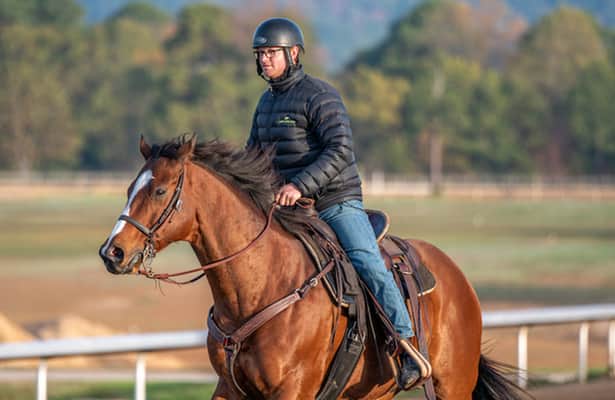 When trainer Riley Mott said he would be based this winter at Oaklawn, he meant it.

Mott celebrated his landmark victory in Arkansas, where he is overseeing his growing stable, expected to reach 25, when the 2022-23 Oaklawn meeting begins Dec. 9.

“Oh, yeah,” Riley Mott, 30, said during training hours Monday morning. “I’ve got to take care of these (horses). The ones that ran at Churchill were in my dad’s barn, being taken care of by his assistant.”

Riley Mott said he watched Unifying’s victory from the couch of his Hot Springs residence, along with wife Megan and their 15-month-old daughter, Margot. Unifying was saddled by Bill Mott’s longtime assistant, Kenny McCarthy, who oversees the trainer’s Kentucky division. Riley Mott spent about eight years as an assistant to his father before going out on his own earlier this month.

Unifying's win “takes the pressure off for Oaklawn,” Mott said.

Unifying was Mott’s third career starter after American Tattoo ran sixth in a claiming race Nov. 2 at Churchill Downs and Spunk finished third in a maiden-claiming event Nov. 6 at Churchill Downs. Mott said he also was in Arkansas for those two races because Oaklawn’s stable area opened Nov. 1.

“We always planned just to run three at the Churchill meet,” Mott said. “(Unifying) looks like the last one, and I had the best feeling of the three with her. She had run really well in New York first time. When the PPs came out for her race, she looked pretty tough in there.”

A 2-year-old daughter of Union Rags, Unifying ($4.90) scored a front-running 1 3/4-length victory under Florent Geroux. She was exiting a runner-up finish for Bill Mott in her career debut, another maiden special weight sprint, Sept. 15 at Belmont at The Big A. Riley Mott said Unifying was to be vanned to Oaklawn to join American Tattoo. (Spunk was claimed out of her race for $30,000.)

“Got to decide whether to keep her sprinting or stretch her out,” Mott said, referring to Unifying. “In both of her races, she’s galloped out well in front of the field. She’s not built like a two-turn type, but sometimes they don’t have to be.”

Mott said he hopes to continue to build his stable through Thursday’s Keeneland November horses of racing age sale. Same business model – Mott will be in Arkansas, not Kentucky.

“I’ll stay here,” Mott said. “I have a bloodstock associate there for me, so we’re going to be shopping. I’m looking at all the PPs and stuff on the horses.”