Ward: Sitting idle, Arlington puts its stuff up for bids 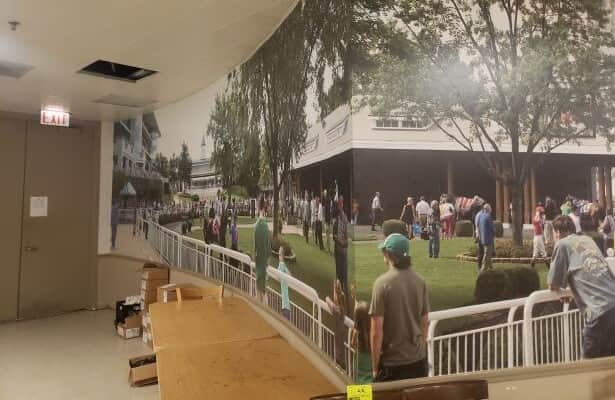 So much about Arlington Park as it was for an auction preview Monday afternoon feels the same as last year. The parking lot was almost empty, but I tended to get to the track early enough and leave late enough on race days that I rarely saw it in any other state.

The cantilever roof still soared over the boxes, the grandstand and the clubhouse, defying gravity as always.

The paddock looked like it always had. All the entrances were either locked or fenced off, but even through metal bars it was the same old place, physically speaking. The grass was green, nicely cut. The trees stood ready to provide shade to no one. John Henry and The Bart, after years of watching over Grade 1 winners and $5,000 claimers alike, waited for familiar faces that will never come.

The rails remained intact and the poles look much like last year. They showed a few signs of wear: The golden ball had been plucked from atop the three-sixteenths pole, the five-sixteenths was still gone, but that pole was missing last year, too. They still successfully sketched out the contours of a racetrack.

The Polytrack looked more compact than usual, but it was still that deep charcoal color flecked with red, green, blue and yellow. It looked it could be fluffed back into shape with a few circuits of the tractors. There were even still tire tracks impressed in it, a quiet reminder of my last visit there 10 months ago.

Standing beside the track, the first suggestion that something was off was the smell. The Polytrack smell, like a box of Crayolas on an August afternoon, was familiar. Subconsciously, I had expected the track surface to be scraped out, so seeing it was a welcome comfort. But I was so used to smelling the mix of Polytrack and horse that to smell only the surface and not the animals knocked me off kilter.

Standing outside the gate near the quarter pole, a few other things looked strange. The benches were gone from the apron. I knew how to process that: My brain just shifted them inside, lined up in the grandstand, the same place they lurked when the track ran spectator-free for most of the 2020 season. But, instead of perfect white concrete stairsteps, each level was separated by a line of weeds that shot up through the cracks. Some were short and brushy. Others would have hit my thighs had I been able to walk that close.

The only part of the racetrack building open to the public Monday was a group of rooms off the loading dock, kitchens and storage rooms. The first lot of merchandise from inside the Arlington Park building goes on sale Tuesday, and the public had six hours on Monday afternoon to inspect the offerings in person. Tuesday at 10 a.m. EDT, lot No. 1 will go online. It will be mechanical: 20 seconds to bid. If anyone bids, the clock adds 20 more seconds for the next bid, and so on. When 20 quiet seconds elapse without anyone bidding on that five-tier metal rack, the virtual hammer drop will drop. The auction will move on, all the way on to Lot No. 639: a 48-by-30-inch laminated desk with filing cabinet, cushioned chair, 22-by-18-inch picture, and a 36-by-24-inch corkboard.

The picture does not feature a horse. Little of the equipment on offer Tuesday does. Most of the lots could have come from anywhere, and there's a certain comfort in that. The end of Arlington still doesn't feel real yet. My Arlington wasn't pale floral watercolors, walk-in coolers or industrial-size cans of cheddar cheese sauce.

That wasn't the Arlington my friends knew, either. I didn't expect a lot of horse people Monday at Arlington. They'll probably come in the next couple of months, as the merchandise shifts from institutional fixtures to racing memorabilia. I ran into one of my racetrack friends who had come by on his lunch break. He was walking out as I walked in, and we talked for a while about how sad and absurd this all was.

We talked about the Arlington Million, which usually would be my reason for being at the track on a Monday afternoon in August. This year, the mid-August time frame feels right, but the Louisville location makes it a faint echo of the Million we know.

We finished our conversation, and I walked into the inspection. I weaved my way around people looking at the kitchen equipment. People were not reminiscing about Dr. Fager or Secretariat, about The Pizza Man or Bricks and Mortar. As I wandered through the only auction preview room that also had horse murals on the wall, a person in a Chicago Bears shirt asked aloud when the Bears game was going to kick off.

But the kickoff is still years away. Even the complete emptying of the grandstand is still months away. As I wandered the sale, I knew it wouldn't be my last time at Arlington, my summer home for almost a decade now. Later this summer, I'll return when the public can look at some of the racing memorabilia. Despite not being much of a "stuff" person, I might even choose a piece or two to bid on.

I'll believe Arlington is going away when I can bid it goodbye in the company of fellow horse-racing fans. I'll believe it when I can see with my own eyes that the pieces of the Arlington I remember are about to leave the grounds. Until then, it looked intact enough Monday that I'll cling to my futile dream that racing could start up again there at a moment's notice.

Rowan Ward, who is a free-lance editor for Horse Racing Nation, has worked as an Equibase chart caller at Chicagoland tracks since 2017.