With Prevalence a go, 9 now probable for Wood Memorial 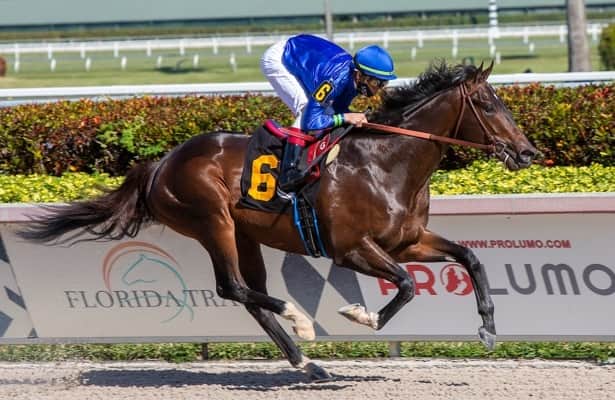 Godolphin homebred Prevalence, unbeaten in two starts at Gulfstream Park, will take a swing at making the Kentucky Derby in next Saturday's Wood Memorial (G2) at Aqueduct.

Jimmy Bell, president of U.S. operations for Godolphin, confirmed to Daily Racing Form on Friday Prevalence would chase the 170 Derby points on offer in New York rather than the Blue Grass (G2) at Keeneland the same day.

With the addition of Prevalence, and Thursday's confirmation of Candy Man Rocket by trainer Bill Mott, the NYRA racing office now lists nine probables for the $750,000 Wood going 1 1/8-miles. The race pays Kentucky Derby qualifying points on a scale of 100-40-20-10 to the first four finishers. A top-two effort would likely be enough to earn Prevalence entry into the Derby field.

By running in the Wood, Prevalence will remain apart from Godolphin's other Kentucky Derby hopeful, 2-year-old champion Essential Quality, who will go in next Saturday's Blue Grass.

Trained by Brendan Walsh, Prevalence will be making his stakes and two-turn debut in the Wood. He was a smashing 8 1/2-length winner going seven furlongs on debut at Gulfstream on Jan. 23, but in the ensuing weeks spiked a fever and had to miss a possible allowance race in February. Prevalence recovered in short order and returned in a one-mile allowance race on March 11 at Gulfstream, which he won by three lengths.

By Medaliga d'Oro, Prevalence is out of the Ghostzapper mare Enrichment and hails from the family of Desert Stormer. In this weekend's pool 5 of the Kentucky Derby Future Wager, he opened at 20-1.