With Sáez taken, Art Collector gets a new rider for the Classic 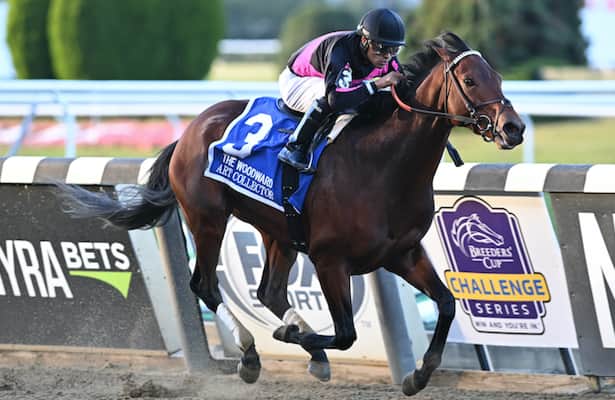 Art Collector's three straight wins since August under new trainer Bill Mott all came with Luis Sáez in the saddle.

But Sáez also is the regular rider for Essential Quality, so Art Collector's connections had to find a new rider for the Breeders' Cup Classic.

"I have a long relationship with him, so does Bill," Lunsford said. "I like his riding. I've had good luck with him over the years, and he's got a lot of sense about what to do out there. We're going to be the old guys."

Citing Art Collector's "very good" wins in the Alydar, Charles Town Classic (G2) and Woodward (G1), Lunsford said, "I think the horse has shown he can run a mile and an eighth pretty easily. The first race was just kind of an easy race for him. He could run it and didn't have much to battle. One horse closed a little ground, but he really wasn't riding that hard.

"And then he ran a great race at Charles Town, because the horse that won it the year before (Sleepy Eyes Todd) was in front of him, and he was on the rail. And nobody was getting around anybody once they got to the lead, and he just set off. Even when he made the move, he just moved around him and kind of moved away. I thought that was a good sign.

"And then the race up in New York, everybody in there was either a Grade 1 or Grade 2 winner. They were a good crew, particularly Code of Honor and Dr Post and certainly Maxfield. And so I think he's handled everything we've asked of him. This is clearly a tough race. It's going to be a rider's race a little bit, because they're all good riders."

Lunsford said Mott planned to ship Art Collector to California on Tuesday, more than a week before the Classic, because "he didn't want to take a chance on getting in the in the free-for-all with the rest of them, which I think is smart."

The Classic likely will not be the last we'll see of Art Collector on the track.

"He's really done all the things I could ask as an owner, and I'm hoping to have him run next year too," Lunsford said. "I haven't had one like this for a while. I'll let him tell us when he needs to retire. Because I'm a horse racer more than I am a horse breeder. But again, he's going tell us if he gets tired of racing. And we take good care of him, we don't run him that often."