Wisener: Stakes all in the family for Tacitus, Chocolate Kisses 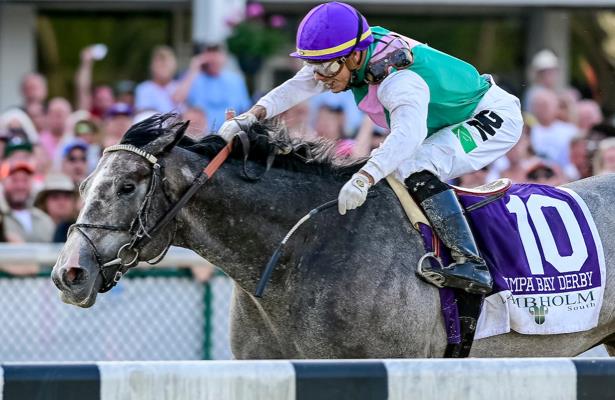 Somewhere I can hear Mick Jagger singing about "useless information that's supposed to drive my imagination."

Devoting more time to horse racing and less to basketball on Saturday, I might have experienced more, uh, satisfaction at the betting windows. Narrowing it further, a few minutes more handicapping two stakes races could have made the difference between the small financial bite I took and a nice gain.

The Tampa Bay Derby at Tampa Bay Downs and the Honeybee at Oaklawn Park finished within minutes of each other. Tacitus, trained by Hall of Famer Bill Mott, won in Florida and Chocolate Kisses, representing Hall of Fame nominee Mark Casse, had her picture taken in Hot Springs. Don't be surprised if both pop up at Churchill Downs in early May, the colt in the Kentucky Derby and the filly in the previous day's Kentucky Oaks.

Mott, the least likely trainer you'd expect to come down with Derby fever, already had Hidden Scroll on the road to Louisville. Casse had last year's Oaks runner-up in Wonder Gadot after running champion Classic Empire in the 2017 Derby. No surprises there.

Nor should anyone be shocked that the Tapit colt and the Candy Ride filly, February 2016 arrivals in Kentucky, are exquisitely bred. Tapit, now 18 and standing for $225,000, has exceeded Smarty Jones, from the same crop, as a sire in the manner that Alydar trumped Triple Crown rival Affirmed. Candy Ride, an Argentine import, never lost on the track in six starts; now 20 and standing for $80,000, he certainly will be remembered for siring 2017 Horse of the Year Gun Runner.

Still, anyone who follows this sport to any degree knows about Tapit and Candy Ride. Less so perhaps about the mares who produced the 2019 Tampa Bay Derby and Honeybee winners, to which we turn after this lengthy preamble.

My interest in Tacitus grew exponentially when Candice Curtis of Horse Racing Nation went on Twitter to say "that's Close Hatches' kid." Turns out Tacitus is the first foal of Oaklawn's 2014 Apple Blossom Handicap winner, one of five Grade 1 victories in a racing career that she bankrolled $2.7 million for Juddmonte Farms. Once in the breeding shed, Close Hatches was booked to the hottest sire going, Tapit, and Mott, who trained the dam, is going places with her offspring.

Brownie Points, the homebred dam of Chocolate Kisses, earned slightly less than $1 million and never got the Grade 1 victory that would have sent her value into the stratosphere. But Brownie Points counted Oaklawn's 2006 Martha Washington among her nine victories, and she could not have been more game when completing the exacta with Zenyatta in the 2008 Apple Blossom.

In the broodmare band of Josephine Abercombie's Pin Oak Stable, Brownie Points got on the scoreboard early with Synchrony, a Triple Crown hopeful in 2016 and now thriving on turf. Synchrony, by Tapit, and who like Brownie Points raced at Oaklawn for Donnie Von Hemel, is a half sister to Chocolate Kisses.

These family tales occur more often than you think.

• Beholder, a four-time champion and 11-time Grade 1 winner, is related to Grade 1 winners Mendelssohn and top sire Into Mischief. Their dam, Leslie's Lady (by Tricky Creek), produced an American Pharoah filly last year; look for her on the track in 2020.

No story about breeding is complete without mentioning the broodmare Somethingroyal. Sir Gaylord, her 1959 foal, loomed as the favorite for the 1962 Kentucky Derby before sidelined by an injury. Somethingroyal, by Princequillo, delivered in 1970 a Bold Ruler colt who would become the first Triple Crown winner in a quarter century and achieve immortality.

The world knew him as Secretariat.

Bob Wisener covers horse racing for The Sentinel-Record of Hot Springs, Ark., where he was sports editor for 37 years.
Chocolate Kisses Tacitus