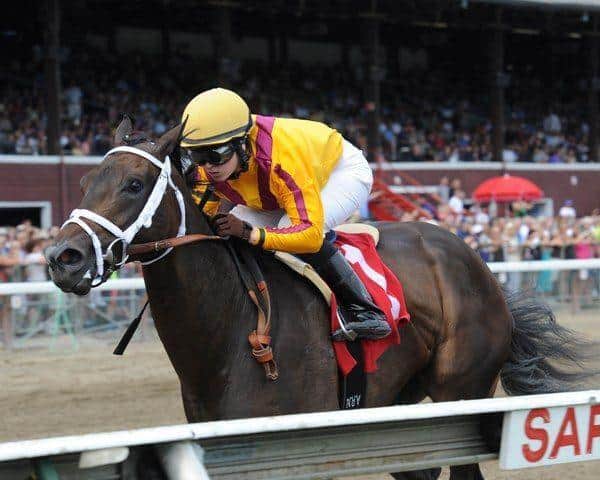 Kauai Katie turned back in distance for Saturday’s $100,000 Old Hat (G3) and took a turn for the ‘bettor’ at Gulfstream Park.

The 1-10 betting favorite, who suffered her first career defeat with a fourth-place finish in the two-turn Breeders’ Cup Juvenile Fillies (G1), returned to her old winning ways in the Old Hat, a one-turn, six-furlong sprint for 3-year-old fillies.

Kauai Katie, who has won her first three races by a total of more than 22 lengths, overpowered her four rivals by eight lengths, skipping six furlongs in 1:09.66 under a hand ride by jockey John Velazquez.

“I’m not surprised at all. She’s a very good filly. She’s probably at her best at a little shorter distance than we tried in the Breeders’ Cup,” trainer Todd Pletcher said. “Honestly, I don’t think she really handled the track that day, because as fast as she is, she was never pulling herself along. She’s probably better sprinting, but I’m not positive she liked the track that day.”

Kauai Katie broke alertly from her No. 1 post position as Cor Cor, the 3-1 second choice ridden by Scott Spieth, sprinted clear to quickly open up a couple of lengths on the favorite. The previously undefeated Tampa Bay invader set swift fractions (:22.22 and :44.99) for the first half mile as Velazquez slipped Kauai Katie off the rail to gain a most ominous stalking position leaving the backstretch.

Cor Cor, won the Sandpiper Stakes at Tampa Bay last time out, maintained a tenuous advantage into the early stretch before Kauai Katie asserted herself to roll to a convincing victory for Stonestreet Stables LLC.

"I wasn’t going to let Cor Cor get away too easily, so I put some pressure on her,” Velazquez said. “When I got to her, Katie pulled away from them, and she made it easy for me.”

“She was impressive. I was concerned about the ‘three’ filly (Cor Cor). It looked like she had a lot of speed, and from the one post, it makes it a little bit difficult tactically. It worked out well. The other filly cleared and we were able to get to the outside and make a move to stalk.”

Pletcher said the Forward Gal (G2) at Gulfstream on Jan. 26 is likely to be the next goal for the swift daughter of Malibu Moon.

Kauai Katie is likely to meet an exciting prospect in Live Lively, who romped to an entry-level allowance race by 11 ¼ lengths under Joel Rosario. The daughter of Medaglia d’Oro led throughout the seven-furlong race that preceded the Old Hat.

“This filly has been training well,” Hennig said. “I’m not really surprised because I’ve thought so highly of the filly all along.  We’ll see how she comes out of it.

Obviously, the Forward Gal (G2) is the next progression on Jan. 26 – that’s where the Old Hat horses would go. I think she wants to run further, too.”