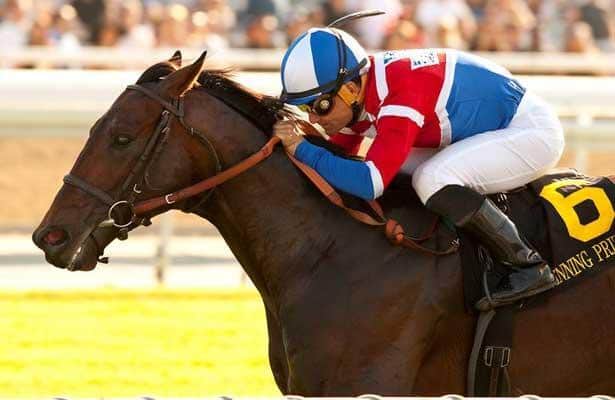 Argentine-bred Winning Prize, with Corey Nakatani up, made every pole a winning one in Saturday’s Grade I, $350,000 Frank E. Kilroe Mile at Santa Anita, prevailing by a half length over Florida-based shipper Lochte while getting a mile on turf in 1:32.44.

Trained by Neil Drysdale, Winning Prize came off a sharp win in the Grade II, one mile Arcadia Stakes on Feb. 1, and was dispatched as the second choice at 7-2 in a field of nine older horses.

“I know this horse didn’t have to be on the lead, but today, it was coming easy to him and I wasn’t going to take it away from him,” said Nakatani.  “Whatever he was comfortable with, we were going (to let him do it).  We were getting a little bit of pressure, but I was able to get him relaxed.

“He had his ears pricked and it was just nice and comfortable.  He likes that high cruising speed…we let him do his running and he showed he was the best one today.”

“We were expecting that other horse (Regally Ready, with Mike Smith) to go to the lead,” said Drysdale.  “When he took him back, it left us on the lead, and he wasn’t pressured badly…It makes a big difference when you can get away with an easy first half mile.  That sets us up well.

“He quickened well in the stretch.  He’s changed and relaxes in his races.  He’s becoming more adaptable the more we race him.”

Ridden by Joe Talamo and trained by Ron McAnally, Suggestive Boy was away a bit slowly, had two horses beat into the Club House turn and rallied five wide turning for home to finish third, a neck in front of Breeders’ Cup Mile runner-up Za Approval, who was the 9-5 favorite with Joel Rosario.

Za Approval stalked the pace while saving ground and had no apparent excuses, finishing third, a neck in front of 7-2 second choice Silentio.  Za Approval paid $6.80 to show.