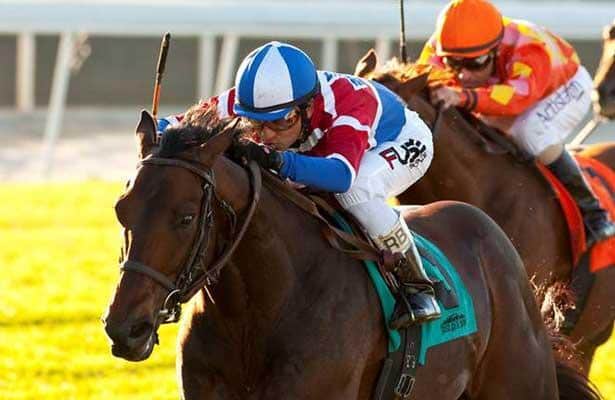 Ridden by Rafael Bejarano, Winning Prize sat a relaxed second early and pounced on pacesetter Regally Ready in deep stretch to win Saturday’s Grade II, $200,000 Arcadia Stakes going away by 1 ½ lengths, covering one mile on turf in a rapid 1:32.89.

A 5-year-old horse by the Storm Cat stallion Pure Prize, Winning Prize is owned by David Heerensperger and Jose Nelson.  He collected $120,000 for the win, boosting his earnings to $400,840.  He now has seven wins from 12 starts.

“I just told Rafael ‘If one of the (Steve) Asmussen horses (Regally Ready or Unbridled’s Note) wants to go to the lead, both are speed horses, just let them go.’  The owners decided not to rush him (regarding what races to run in) and it’s working out well, because you have a long meet this year…He’ll come back in the Kilroe (Grade I, mile turf on March 8) if everything is all right.”

A comfortable third throughout, Tom’s Tribute found his best stride late and overtook Regally Ready late to finish second by a neck under Gary Stevens.

Regally Ready, who was an impressive gate to wire classified allowance winner at the distance over the course on Jan. 2, was ridden by Mike Smith and set fractions of 23.14, 46.16, 1:09.59 and 1:21.34.  He had an approximate four length advantage on the winner leaving the three eighths pole, but tired late to finish third, a half length in front of stablemate Unbridled’s Note.

Last year’s Arcadia winner, Suggestive Boy, who hadn’t run since winning the Kilroe 11 months ago, was the 5-2 favorite with Joe Talamo, flattened out through the drive to finish fifth in a field of seven.

“He just got a little tired today,” said Talamo.  “…The last part of the race they just out-quickened him.  So, he was just tired and I think it sets him up for his next race.”