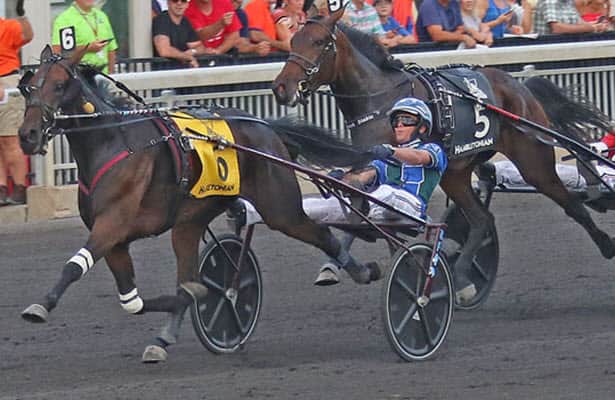 Three months after Rich Strike shocked the world in the Kentucky Derby at odds of 80-1, Cool Papa Bell became the longest shot in history to win the Hambletonian Stakes, scoring at 52-1 for Scott Farber's Runthetable Stable.

And now Farber is ready to target that other race for 3-year-olds.

"I'm a goal-oriented guy, and I always said once I won the Hambletonian I'd move my focus to the Kentucky Derby," he said after Cool Papa Bell's upset at The Meadowlands. "So I'll start rallying the troops and figure out how to do that."

Even a Kentucky Derby win, though, would not be Farber's biggest win. The father of four said that pitching the national championship victory for William Paterson University in 1992 and handing the game ball to his father would be impossible to top. Farber said his father is who introduced him to harness racing, and he did not want his son to continue in the business.

"My dad knew how difficult this business is, and he didn't want me involved, but when he passed away he lost his say in the matter," Farber said choking back tears. "I wanted to keep building what he started. I wanted to keep going and win these races off the foundation he had built."

A big base of that foundation was built in 1987 when the Farbers met trainer Jim Campbell. That was the same year Jim's brother, John, won the first of his six Hambletonians. Jim and John teamed to win the 1995 edition with Tagliabue, and Jim Campbell said this year's win 27 years later was just as sweet.

Farber and Jim Campbell worked together on acquiring Cool Papa Bell when targeting the Chapter Seven yearling at the 2020 Fasig-Tipton Lexington Selected yearling sale. The $100,000 sale price is the most Farber had ever paid for a horse. Farber initially named the colt Seven Year Itch but changed it to Cool Papa Bell after Campbell gelded him in June of his 2-year-old year.

"We've always had a lot of confidence in this horse," Jim Campbell said. "He ran well enough in the sires stakes and Breeders' Crown elims last year that we wanted him staked for all the big races as a 3-year-old."

Cool Papa Bell lost three straight, including breaking stride in the Zweig, before getting back on track with an open-lengths New York Sires Stakes win on July 19 at Yonkers.

Then in his Hambletonian elimination he showed some late trot to be third behind Hambletonian favorite Rebuff and earn his way into the final where Todd McCarthy picked up the drive and drove a masterful race to shock the world in 1:51.60. Filly Joviality was three-quarters-lengths back in second. 7-10 favorite Rebuff made a bold move early before fading to sixth.

"Was just right place right time for me," McCarthy said after his first Hambletonian victory. "I've driven a few for Jim, and it worked out that I could get behind this one."

Indeed, another similarity between Cool Papa Bell's Hambletonian and Rich Strike's Kentucky Derby is both closed from way back, weaving through traffic before a late burst found the wire first. McCarthy tipped to the outside with Cool Papa Bell while Sonny Leon used an inside dive aboard Rich Strike.

"It was one of the best drives I've ever seen," Farber said. "He just kept finding spots to move up one by one then they turned for home and boom."

Farber and Campbell said after the Zweig that they worked on Cool Papa Bell's handling of the turns, which certainly improved in the Sires Stakes win around four turns at Yonkers and paid big time in the Hambletonian when passing four horses in the third quarter, which is mostly around the far turn at The Big M.

As for the winning spoils of owning a 52-1 winner of harness racing's most prestigious race, Farber will have to settle for his share of the purse because he "never bets his horses."