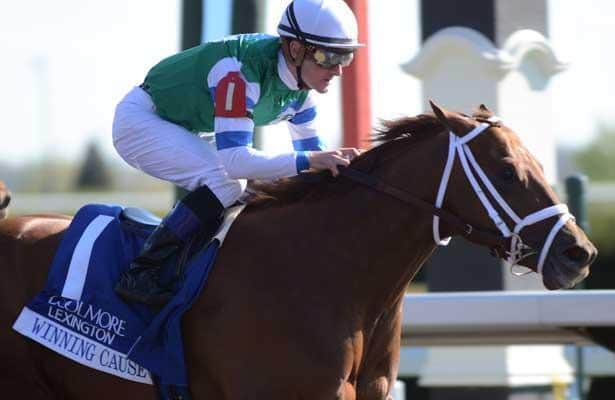 Alto Racing’s Winning Cause roared past Cerro (IRE) in upper stretch and held off longshot General Election by a length to win the 32nd running of the $200,000 Coolmore Lexington Stakes (G3) for three-year-olds before a crowd of 32,325 on a sunny Saturday afternoon at Keeneland.

Prior to the Coolmore Lexington, Dan Considine and Steve Snowden’s Sweet Cassiopeia won the 17th running of the $100,000 Giant’s Causeway Stakes for fillies and mares by 1¼ lengths over Spun Cap.

In addition to the $120,000 winner’s share, Winning Cause earned 20 points toward the $2 million Kentucky Derby Presented by Yum! Brands (G1) on May 4 at Churchill Downs. The Derby is limited to the top 20 point-earners that pass the entry box, and the cut line sits at 20 with one more race with points remaining, next Saturday’s Derby Trial (G3).

Winning Cause, a Keeneland sales graduate who is undefeated in three starts here, is a Kentucky-bred son of Giant’s Causeway out of the Kingmambo mare Raffishing Look. The colt improved his record to 7-3-1-0 and his earnings to $206,140.

Cerro finished a neck back in fouth and was followed in order by favored Sunbean, Wings of Fortune, Pure Fun, River Rocks, Examen and Hip Four Sixtynine.

In the Giant’s Causeway, Sweet Cassiopeia collared Spun Cap at the top of the stretch and pulled clear inside the eighth pole to post her fifth consecutive victory.

Trained by Bill Connelly and ridden by Rocco, Sweet Cassiopeia covered the 5½ furlongs on a firm turf course in 1:03.07. The victory was worth $60,000 and improved Sweet Cassiopeia’s earnings to $456,640 with a record of 18-9-4-2. It was the first Keeneland stakes victory for Connelly and Rocco.

Sweet Cassiopeia is a five-year-old Kentucky-bred daughter of Five Star Day out of the Salt Lake mare My Sweet Caroline.

Sweet Cassiopeia returned $6.20, $4 and $3 as the favorite in the field of nine. Spun Cap, ridden by Joel Rosario, returned $6.60 and $4.20 with Sounds of the City rallying for third to finish a head back under Julien Leparoux and returning $4 to show.

Sensible Lady finished fourth and was followed in order by Formal Plan, Extravaganza, Kiss in the Forest, Rosa Salvaje and Sally Sally.

Earlier on the program, owners Ken and Sarah Ramsey sent out their Keeneland-record 13th winner of the meet. Calumet Farm had 12 winners in the 1941 spring meet and the Ramseys last fall and Mr. and Mrs. Robert F. Roberts in the fall of 1968 had 12 winners.

Well on their way to a 12th leading owner title at Keeneland, the Ramseys broke the record with Scealeile ($7.40) in the first race and added to their total with a victory by Awesome Flower ($4.40) in the seventh and Suyeta ($5.40) in the 10th.