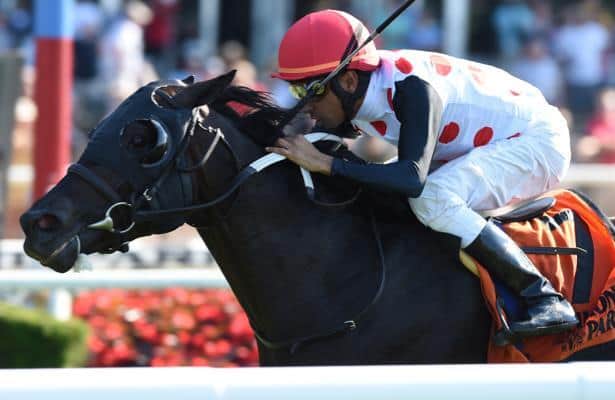 With a last-to-first move in his turf debut, the former Triple Crown runner Win Win Win set himself up for an extended career on grass Thursday by taking Belmont Park’s $100,000 Manila Stakes.

Under regular jockey Julien Pimentel, the Michael Trombetta trainee was able to close into moderate fractions given the one-mile distance as longshot Ian Glass went in 22.77 and 45.29 to open proceedings.

Win Win Win, a son of Hat Trick, rallied widest of them all in the stretch, nipping 3-1 favorite Fog of War at the wire.

"He's just got some much maturity," Pimentel said. "He used to be playful -- not anymore. He's more focused on running."

A homebred for Live Oak Plantation, Win Win Win ran ninth in the Kentucky Derby and seventh in the Preakness Stakes. Trombetta had him entered for a debut on grass last November, but a 5 1/2-furlong sprint at Laurel Park moved to the main track, Win Win Win prevailed, and from there he had remained on dirt until Thursday.

Trombetta termed the Manila an experiment, noting the colt works over synthetic regularly at the Fair Hill training center in Maryland.

"We're already jumping into the summer months," the trainer said before Thursday's race, "so coming off what we've been doing with these long mile-and-a-quarters, things like that, we figured it would be a good time to cut back in distance and give this a try."

Behind Win Win Win, who returned $10.20 in living up to his name, the Grade 1 winner Fog of War was second by a half length and Casa Creed third in a field of eight.